A lawyer has been ejected from Arthur Cox's London office for losing their rag at a partner, RollOnFriday understands.

Described rather pejoratively by a source as "a Christian nutjob", the associate at the Irish firm was allegedly escorted off the premises last Wednesday after they shouted at a partner.

It was "very awkward", said the insider, who claimed that the lawyer cast from the temple had created "stress" for their colleagues for some time. 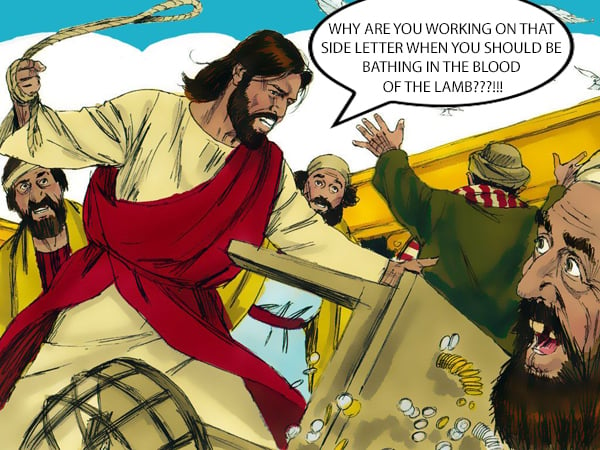 Arthur Cox's London office said "He's not the Messiah, he's a very naughty boy" did not respond to requests for comment.

It would not be the first time the righteous have upbraided Arthur Cox for its failings. In 2015 a cancer charity banned the firm from making donations because of its work for Japan Tobacco. When Arthur Cox advised trainees to watch what they eat in 2014, critics told RollOnFriday, "clearly they want slim folks with no mates". And when it built a putting green in its Belfast office in 2013, it was compelled to make clear that only partners paid for the construction.

If you've yet to get thrown out of private practice, be a just God in the RollOnFriday Firm of the Year 2020 survey. If you spurned Satan's offer of riches and went in-house, take the In-House Survey.

Is that a picture of Dave Grohl?!

Oh, so the RoF lackey doesn't like Christians either? Any other stories they can find with the most tenuous of links to a group they want to slag off?

Pretty sure christianity can take it, fuming vicar at 18:47 - have some faith!

A very inaccurate account. Someone feed you a misleading story. You should look  into  it and get more detail.