Skip to main content
Dancing Law Firm of the Week 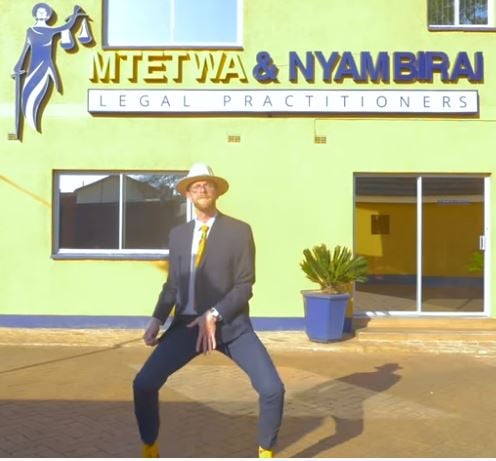 A Zimbabwean firm has demonstrated its "peaceful defiance" of the government through the medium of dance.

Mtetwa & Nyambirai has been representing journalist Hopewell Chin’ono and Transform Zimbabwe leader Jacob Ngarivhume after they were charged with inciting public violence in connection with protests against state corruption in July.

The lawyers claim the ruling Zanu PF party has targeted them, too, for defending the pair. They said that while Chin’ono and Ngarivhume were detained at the country’s notorious Chikurubi Maximum Security Prison after being denied bail three times, the police repeatedly stopped the firm’s staff from working under the guise of enforcing Covid lockdown regulations.

In a bid to "let off a bit of steam" after a "rough couple of weeks", founder Beatrice Mtetwa said she arranged for a mass dance to Master KG's hit Jerusalema, led by colleague Douglas Coltart. As the white guy in yellow socks hogging the limelight, he can be easily identified.

“Beatrice Mtetwa and her law firm have recorded the most wonderful statement of peaceful defiance against all that Zanu PF has thrown at them and their clients these last few months", said Coltart, " - a joyous rendition of the Jerusalema dance. Amhlophe one and all! What a riposte!”

The video begins with lawyers working at their desks while Mtetwa reads a legal textbook, before the irresistible beat compels them to skip into the garden for a synchronised routine outside her window. It's a tuuuune.

Banger, though someone is a bit too fond of themselves.

Inspirational and humbling. Particularly when you appreciate these folks face a real risk from the Zanu PF regime. Unreal that the world still tolerates it.

Where's Wally? Oh hold on - they're all Wallys

If you like this, slap on The Indestructible Beat of Soweto for some afropop goodness

A good time to bring up the shockingly wrong annulment decision of ICSID Case No. ARB/99/7, Patrick Mitchell v. Democratic Republic of Congo, Decision on the Application for Annulment, 1 Nov 2006.

The ad hoc committee ruled that a law firm could only be said to be "contributing to the economic development" of a country if it worked FOR the government. - So wrong.

I do hope they have learned!

This is gorgeous and looks like they had a real laugh putting it together. Good luck to them.

That's awesome.  Definitely the best legal video I have ever seen.

The white guy is probably centre stage as a clue to the anti-ZANU/ opposition element - David Coltart (Doug’s father?) was a prominent member of the MDC - led by Welshman Ncube.

The white guy had such rhythm...

In order of importance:

1.  That was very inspirational.  Good luck to them and the people they represent.

2.  Turn down the audio and overlay 'Cotton Eye Joe'.  You're welcome.