A law firm is promoting its legal services by allowing clients to play online fantasy football with its lawyers. "Back of the net!" said the firm's marketing team when they came up with the idea, probably.

Paris Smith's game has all the excitement of a typical fantasy football set-up, but without the football or the fantasy, and with insolvency lawyers instead. Clients can tinker to assemble their dream team on the pitch, whilst also dropping any uncoordinated, wheezing solicitors to the bench. All that's missing is an Alex Ferguson hairdryer simulator to blast in the face of the lawyers who underperform. 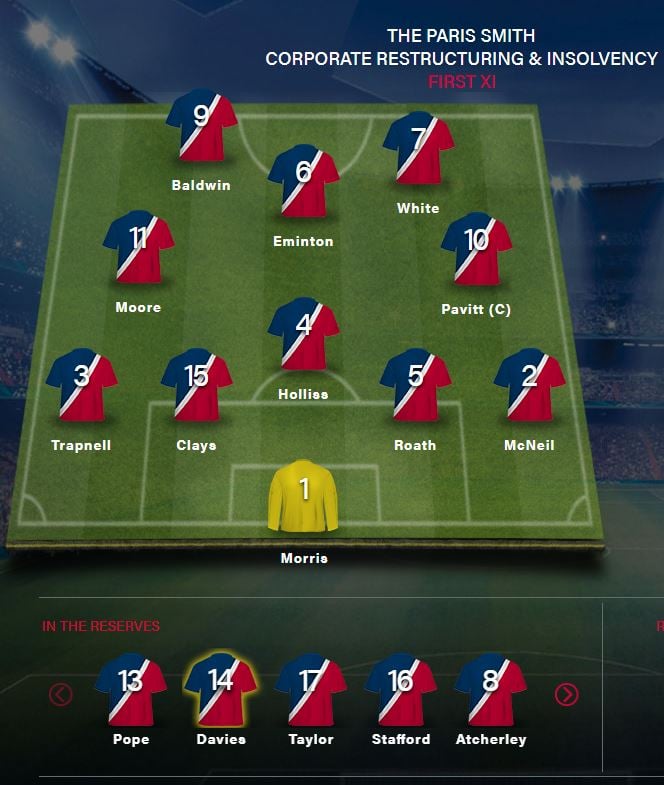 The Southampton firm's interactive game has a bio of each lawyer/player including the number of "seasons" they have been at the "club".  The profiles neglect to mention the usual footballer stats of goals scores, red cards or extra-marital affairs. 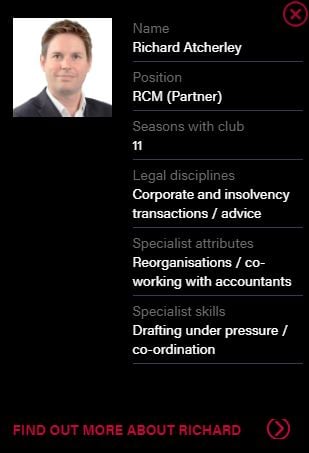 A highlight is the chance to put the Managing Partner, Peter Taylor (not that one), on the subs bench. Or stick him between the sticks to be peppered by the opposition: 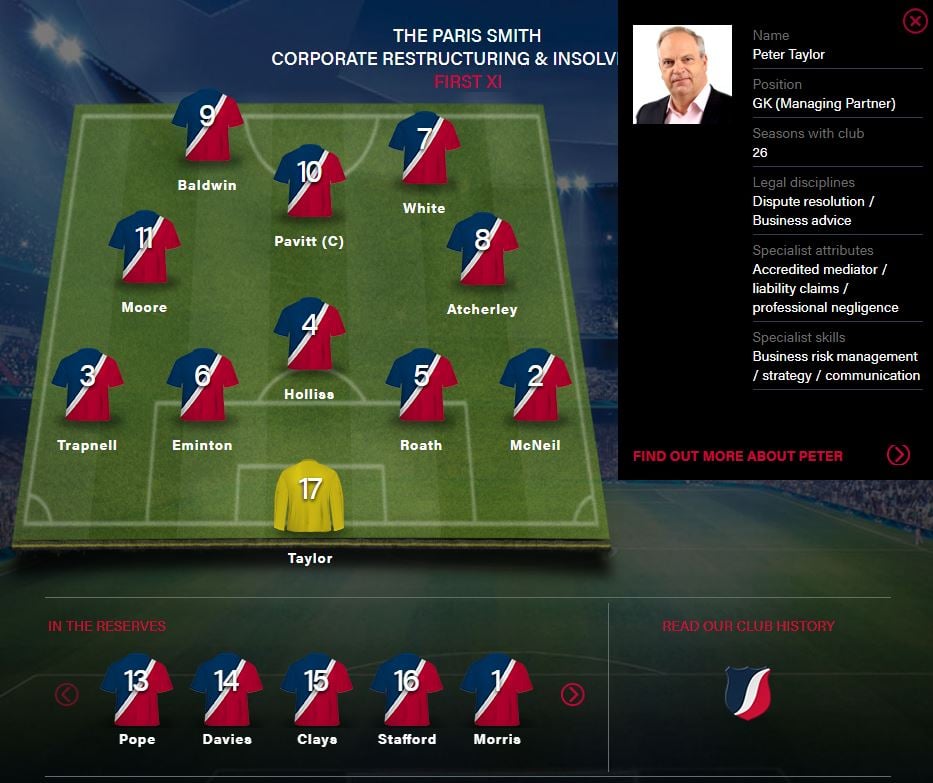 And with 31 seasons at the club, David Eminton seems to be the Ryan Giggs of the firm, but without the injunction: 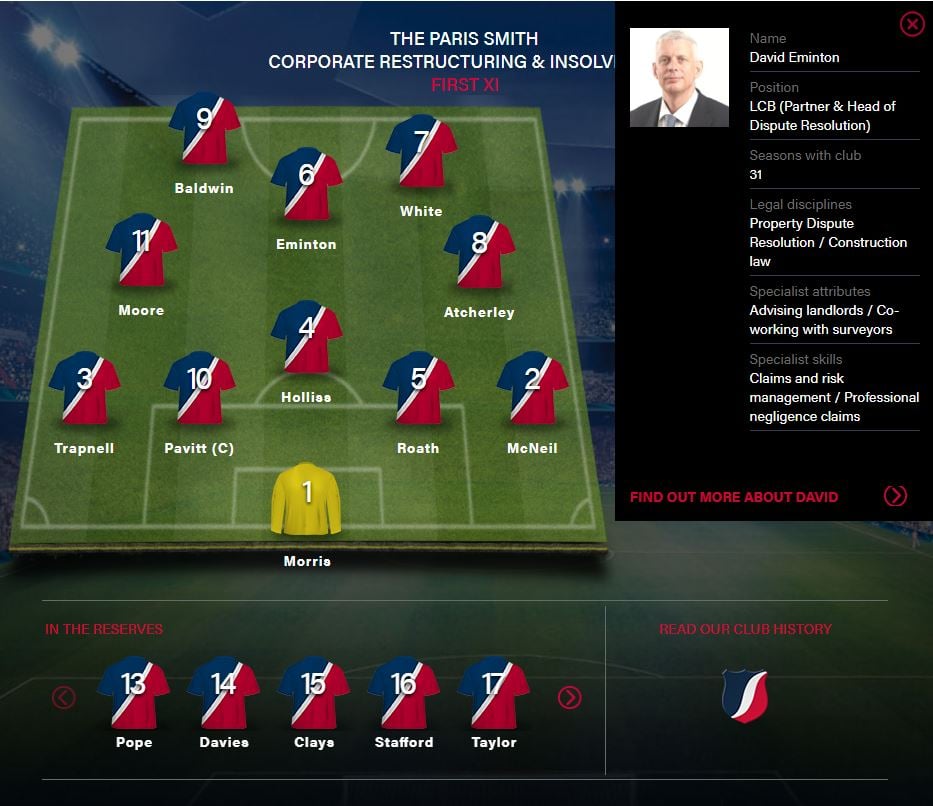 Shoehorning in more football, the firm says on the site "every leading football club with a rich past and glittering trophy cabinet delights in telling its fans about it". Mistaking clients for fans, and confusing the firm for Real Madrid, it continues "Paris Smith LLP is no exception!"  The blurb goes on to describe the history of its offices and how it has helped businesses to restructure, which all sounds as riveting as Phil Neville in the commentary box.

If you would like to put together a fantasy football team of Paris Smith lawyers, the link is here.

Other firms have also opted for desperate football-themed marketing and ended up as sick as a parrot.

I play 5-a-side.  At my old shop, I got a reputation for dangerous tackles.  My reputation preceded me to the extent that when I turned out for my first game at my new shop, the 'manager' told me he was giving me a chance, but that if I displayed any of my old violence and aggression, he'd pull me off at half time.

I much prefer my new shop.  At the old shop, all I got at half time was an orange.

Hmm ... based in Southampton - not much chance of any silverware “You're sh*t and you know you are" might now be an acceptable way to end the conference call” ?

"the 'manager' told me he was giving me a chance, but that if I displayed any of my old violence and aggression, he'd pull me off at half time. "

I think it was wrong of him to incentivise your violent and aggressive behaviour.

You'll have to explain this one. Looks like a legitimate case of a regional firm trying something a bit different. In what way does that make them 'bonkers'? This particular firm looks to be going strong after 200 years, so what level of arrogance does it take for ex-City lawyers who take funding from other City lawyers to abuse it in the name of the rest of the profession? I guess the fact that the firm in question chose to go with a football analogy means they are likely to have a sense of humour about such things, but it doesn't give you a right to lampoon them or infer that they are in some way inferior for attempting to differentiate themselves. It's not irreverent, it's just plain rude. Grow up.

To the chippy anonymous lawyer above.

Actually, I think that RoF is inferring this firm's inferiority from its budget 90's provincial web-site, and then implying such inferiority to the rest of us.

I think I need to keep a collection of these threads so that none of my children ever think about becoming lawyers.

Dear Anon, ROF teases lawyers who attempt to be cool and it particularly teases those who co-opt popular culture.  The next bit might be a surprise but, bear with me.  They tease lawyers for this because the practice of law is not commonly viewed by others as cool.  I am SO sorry if this was not what you were led to believe when you adopted law as your profession.  I'm afraid you were misled.  They really aren't laughing with you down at your football pub of choice.