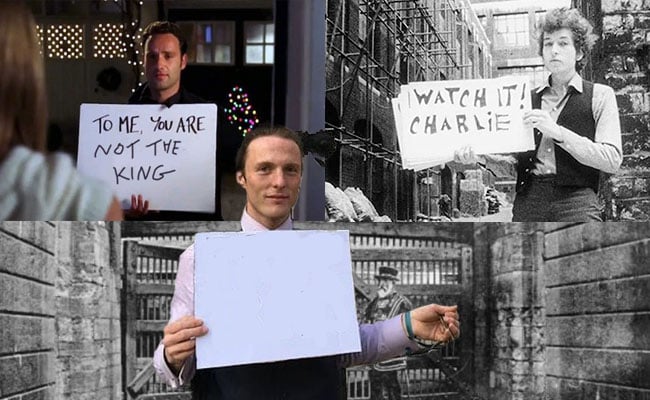 Paul Powlesland and his inspiration.

A barrister has claimed he was threatened with arrest if he protested the monarchy.

Paul Powlesland said he travelled to Parliament Square on Monday and "held up a blank piece of paper". The Garden Court Chambers tenant said a Metropolitan Police officer approached him, asked for his details and "confirmed that if I wrote 'Not My King' on it, he would arrest me under the Public Order Act because someone might be offended".

In a video capturing part of the exchange, Powlesland can be heard asking the police officer why his details were being demanded.

"'Not my King?' 'Someone might be offended'?" says the barrister, incredulously. The clip ends as the officer offers to "give you some advice".

Deputy Assistant Commissioner Stuart Cundy said in a statement, "We're aware of a video online showing an officer speaking with a member of the public outside the Palace of Westminster".

"The public absolutely have a right to protest and we have been making this clear to all officers involved in the extraordinary policing operation currently in place and we will continue to do so", he said.

The Met declined to comment on Powlesland's allegation that he was threatened with arrest if he wrote his message.

"The overwhelming majority of interactions between officers and the public at this time have been positive as people have come to the Capital to mourn the loss of Her Majesty the Queen", said Cundy.

In an appearance on Good Morning Britain, Powlesland, who specialises in environmental law, said the experience had converted him to republicanism, although given his desire to wave a sign around rejecting the rule of King Charles III, he was arguably some way along the path already.

The 36-year-old said on the show, "I think we need to draw a clear line between disrespect for mourning of the Queen and the protesting of Charles’s accession".

"I really love the Queen, I found the idea of the Queen a kind of reassuring presence".

As for Charlie, "He’s coming in saying 'I am now your King, you’re my subject', and I think people should have a right to say, 'I disagree and I don’t want you to be'".

"I think I get a chance to at least make my opinion about what I think about that in very polite terms".

Powlesland said he was protesting "for free speech reasons", and described how, "as precious - if not more precious - than the monarchy is the real, beautiful web of freedoms and civil liberties that we’ve built up here over centuries".

"We’d be very wrong to begin to sacrifice those in this kind of moment", said the barrister.

In Scotland, a 22-year-old woman actually was arrested, after she held up a cardboard sign bearing the suggestion, "FUCK IMPERIALISM ABOLISH THE MONARCHY". She has reportedly been charged in connection with a breach of the peace.

It is Garden Court's second collision with free speech issues this year, having been found guilty in July of discriminating against one of its other tenants, Allison Bailey, by publicly stating that it was investigating her for posting gender critical tweets.

All are amazed by unexpected and unforeseeable chain of events.

"I was outside parliament, the centre of our politics, where someone has proclaimed himself King and said that I’m his subject"

And this chap is a barrister, is he?

Somewhat surprising to learn that he wasn't aware that the concept of British Subject was abolished in 1949. So it's a little unlikely that anyone might be declaring him to be one in 2022.

no silk for him!

Before the enforced outpouring of grief can take place charlie is enforced on the people while the most tedious list of condition predent-like things are to happen - new seals, use of old seals.  tell everyone about the seals. Direct people to give directions. Nothing about enormous cost of those seals or whether charlie bears it.That's just a small part of the web of freedoms enjoyed in 21st Century England.

"Nothing about enormous cost of those seals or whether charlie bears it."

Ah yes, behold as left wingers across the land are very suddenly overcome with a need to account for every penny that the state spends.

A remarkable change of heart for a people not usually so well known for their concern for fiscal prudence, and whose usual answer to a problem is for the state to spend more money on it.

But, budgetary responsibility has very suddenly come into fashion for them though. Who could have seen it coming? And who knows how long the trend will last? I'm sure we just can't know...

But then, it is a strange phase of the moon right now, with curious sights all around us. People who only a fortnight ago would have cheered the police recording your tweets as "Non-Crime Hate Incidents" are now wailing in the streets over the need for greater protection for (their) freedom of speech.

Again, how long do you imagine that state of concern will last?

God this guy’s a tool - I don’t think Charles has proclaimed himself King at all... he’s not some bloke that’s walked in off the street and said he’ll have a go is he?  The Rules were established by the Bill of Rights (1689) and the Act of Settlement (1701) - so I think actually rules set down by UK Parliament have made him King as a matter of Law.  He hasn’t “opted-in” so to speak, instead, he’d have to actively reject the Crown - hardly the power grab portrayed by our honourable friend is it?

I both support Powlesland's right to protest and think he is an attention seeking tw*t.

"suddenly overcome": no. We on left right and centre are tired of thiss family's attempts to silence people and cover things up - from wills to legislative interference, and much more.

I can imagine you are just the sort who would relish all the fawning over your tediously drafted antiquated Orders in Council.

"A barrister has claimed he was threatened with arrest if he protested the monarchy"? Protested against/about, not protested. Let us use the King's English

Assume he will turn down Silk then, if offered, as he won’t want to be a King’s Counsel?

Another example of the left wing luvvies’ bleating about their ‘rights’ whilst failing to grasp the concept that with rights come responsibilities. It is not responsible to insult and provoke mourners at a funeral and the old Bill should have grabbed his collar for a good section 5 of the Public Order Act.

"A barrister has claimed he was threatened with arrest if he protested the monarchy."

After all the tripe that has been written about the GCC region in the last two weeks on this website, it's nice to see that Britain's authorities are proving themselves to be the true bastion of freedom and tolerance but allowing people to express their views in public, whatever they may be.