Skip to main content
The 2015 Golden Turd winner
The most reviled prize in legal history has a new home.

To a fanfare of terrifying farts, RollOnFriday can reveal that this year's recipient of the Golden Turd is none other than Trowers & Hamlins. With a spectacularly low score of 34%, the firm has come a convincing bottom in the RollOnFriday Firm of the Year 2015 survey.


Over 50 points separates Trowers from winner Shearman & Sterling. Staff voted Trowers the second worst in the UK for pay and the worst for career development, with a junior solicitor's claim that training is "non-existent" lent weight by the senior associate who says quality of work "rivals that of a 5 year old with a colouring pencil".

Staff also judged the management the worst in the country, with one making the explosive claim that the firm has become "nothing more than a poorly-run cabal" where "capricious decisions are commonplace" and lawyers unable to find work elsewhere "cement their position by knifing the more capable in the back". Even partners joined in the kicking, wondering if the windows don't open "to stop one ending it all" and ruing the "depressing" view of Slaughter and May next door: "Oh if one had worked harder at school".


Speaking of Golden Turds, the firm also came bottom for commodes. Possibly because "people seem to attempt to write their names in urine on the toilet floors". One Trowers associate summed up a day life in the firm simply by linking to a video of a screaming cartoon face saying the word "Derp" over and over again. For ten hours.

However it wasn't all doom and gloom. One lawyer says the firm is home to "a lot of genuinely wonderful people", while
another says she is "still enjoying the job after 7 years, so they must be doing something right".

Trowers failed to respond to requests for a comment, presumably because management is cringing under the boardroom table. 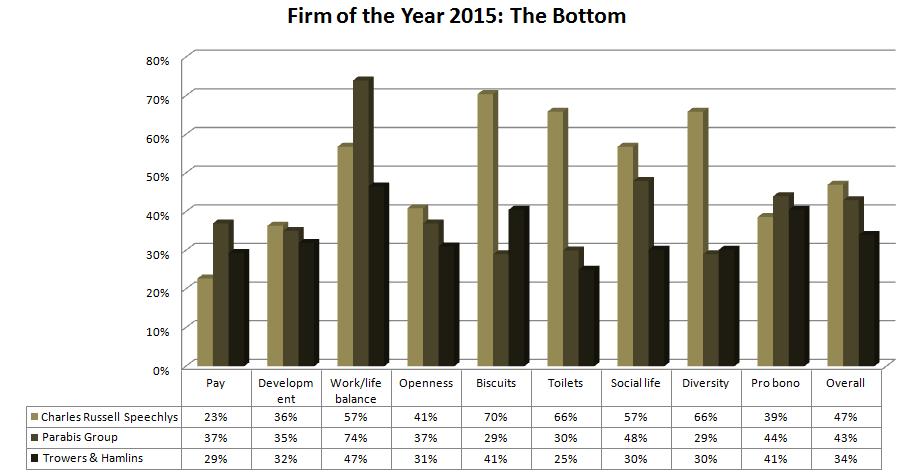 Charles Russell Speechlys and Parabis came third and second last respectively. Parabis won the Golden Turd last year, and it seems many staff still think it is "awful". Lawyers claim there is a "fundamental distrust of the management by employees", possibly because the "secretive" management is "constantly trying to make people redundant". Even becoming a secondee to one of Parabis' insurance clients is no guarantee of a nice life, with one whispering that Parabis lawyers are "detested by the staff to the extent they call you Parabis Wankers". HR kept things in proportion though, and sent an email telling off employees for "using too much loo roll".
Tip Off ROF

Ahahahaha! HR telling off employees for using too much loo roll! Sums Parabis up really!
281
Vote up!
319
Vote down!
Trowers clearly needs to 'change the story' to avoid further bad headlines. May I suggest a Chinese merger? Seemed to work for SJ Berwin.
297
Vote up!
304
Vote down!
It is good to see the merger between Charles Russell and Speechly Bircham was such an excellent idea.
314
Vote up!
278
Vote down!
Would the present winner be interested in some turd polish? JML are offering some for sale on QVC.
302
Vote up!
322
Vote down!
I am one of the above mentioned secondees working as a team leader at the offices of one of Parabis' insurance clients. As far as I am aware, none of the handlers in my team have ever accused me of being a practitioner of the sin of onanism.
330
Vote up!
289
Vote down!
As far as you are aware? That's a pretty big caveat! As a team leader in Parabis you wouldn't know 90% of what is being said as you are most likely nurturing the fear of speaking up amongst everyone around you, which is ruthlessly stemming down from above.
306
Vote up!
295
Vote down!
Well done to Bond Dickinson. From worst law firm in the country in 2012 to somewhere above the bottom three. Credit to the management for shipping out so many of the problem partners. Just a few more to go.
294
Vote up!
303
Vote down!
More moaning from people too scared to use the big thing in the middle of the office - the bloody door.
300
Vote up!
299
Vote down!
Hahaha! Trowers finally gets a bit of recognition. Well done Jenni Gubbins. A truly remarkable thing you’ve achieved in a few short years.
284
Vote up!
313
Vote down!
Parabis remains the worst place to work. Shame it was not last again.
302
Vote up!
296
Vote down!
If you cannot hack it the local authority will be pleased to have you. You will be paid less than the park keeper though to do dog shit prosecutions in an office with a shopping trolley in it full of files and fish wives that gossip all day
305
Vote up!
299
Vote down!
I can only assume that anon at 14.34 on 04/02/2015 is Parabis management. The tone and attitude are just too familiar...
295
Vote up!
312
Vote down!
To 00.18 on 4 Feb: if you genuinely work at Parabis and feel that way it is a shame. However, you can leave and fulfil your promise elsewhere. Don't forget that. Don't waste your energy where you don't want to be. Let the people who want to be at Parabis get on with it, without back biting and snide comments. Please.
308
Vote up!
287
Vote down!
This is well deserved. Within a few short months of joining I have hugely regretted my decision. Staff turnover seems to be high and people are regularly pushed out in a way that would give Stalinist Russia a run for its money. And for all its talk of diversity I have never met a more homophobic work force.

It seems to have a real identity crisis in terms of the work it wants to do. I am currently applying for other jobs. On the plus the offices are nice. I just wonder whether they can keep up the rent.
269
Vote up!
324
Vote down!
More redundancies at Parabis coming soon!!. Really is not the firm to work for.
305
Vote up!
315
Vote down!
The Parabis top brass need to pull their fingers out and start introducing the changes they promised were coming last summer! Pay rise, bonus, benefits, career development!
303
Vote up!
300
Vote down!
Does 15/12/15 20.10 think that their staff ( excuse the assumption, but this must be the case) actually want to be unhappy and miserable? Has it ever occurred to them that people join the firm full of enthusiasm, keen to make a career for themselves and want to stay, but feel badly let down? It is far too easy to evade responsibility for the fact that you, as management are not capable of inspiring and leading others by saying "if you don't like it, do the other."

When you can respond by saying " we want to be the firm you chose to be at. We want to work towards achieving your goals, we want to provide a supportive working environment because ( and here's the bit you appear to misunderstand) Happy workforce = quality work = good reputation = driving up standards = high motivation = happy clients = more instructions = higher billing = PROFIT, staff can believe that promises of change are more than mere platitudes . If you can't see things from a humane point of view, at least see how it might line your pocket. Then everyone will be happy.
316
Vote up!
280
Vote down!