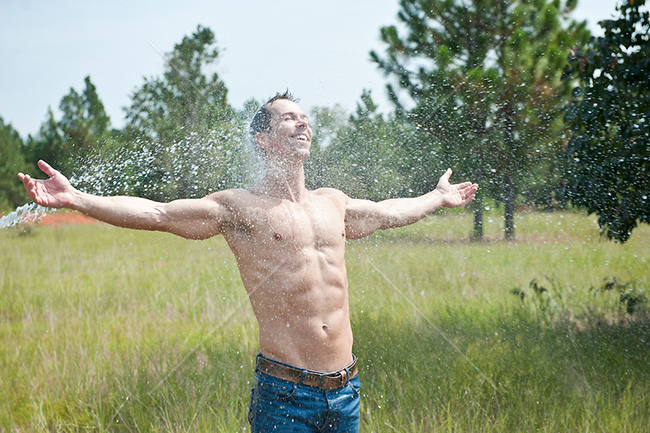 He was having such a lovely dream though.

A City solicitor has driven his wife to despair with his drunken bedwetting.

The unnamed lawyer normally works from home, his partner explained on Mumsnet, but loses control whenever he travels to London for client drinks.

"He gets carried away and orders spirits when he's already steaming on beer", said his wife, who exiled the solicitor to the spare room when he got home.

"I went in to see him at 6am - bed soaking and freezing", she said, explaining that she was going public on her free-peeing partner because he was 52-years-old and she was at her wits’ end. The "lovely mattress topper that all the guests say has made the bed so comfortable" was "probably ruined", she said, recounting how the children saw her carrying the sodden bedding to the washing machine and she was "ashamed to say that I told them, 'Daddy has pissed the bed'".

The soiled lawyer "even tried to get into our bed but I made him have a shower", said his souse. "Now he's being all jolly with the kids and I feel seething".

The woman explained that her husband wet the bed about every six months, and asked posters on the discussion board whether she was being unreasonable for thinking it wasn't normal.

Fellow commenters replied that it was “foul” and chastised her for cleaning up after her sloshed husband.

"You should have let him lie in it, the disgusting pig", said one.

"I'm not just going to let [a] stale piss smell seep around my upstairs for hours when I can sort it sooner", responded his wife, although she agreed with another poster's suggestion: "I probably will tell his mother".

She also expressed sympathy for her incontinent partner, who she said works in transactional law. "One day he worked from 6am to 1am with only a few breaks. He was shouting down the phone to someone at work, who I heard replying in shocked manner", she said. "He's clearly not managing but he can't see any other way".

"I'm a City lawyer", said another poster. "I've done decades of client engagement that involved way too much alcohol on my part or that of others. I understand it's a stressful job and that the lifestyle can suck the salary dry. But his behaviour is not acceptable. Pissing the bed is not acceptable".

Others defended the man. "It's disgusting yes but if it's only happened twice a year it's no big deal", said one. "We all get drunk and do stupid things", agreed a credulous poster, who said her husband "is a City banker - sometimes he just puts himself up in a hotel if he's been on it".

"I love a drink (or two) but wetting the bed is just beyond disgusting. It would be a huge deal for me", replied an appalled mum.

"We have a marriage counsellor next week so I will bring it up", said the solicitor's wife.

This is clearly a man who gave his secretary a golden shower and snuck her out before the wife woke up and had to fabricate a cover story.

She should count herself lucky, I’ve been known to grand slam the bed.

Whilst moderately amusing if this is a regular occurrence then the poor guy should probably either (a) not drink; (b) get some help to drink more moderately;  or (c) get help to not drink at all. In my experience, once someone's at the stage of doing the stuff this guys is doing then (I) that's probably the tip of the iceberg and (ii) you may have a drinking problem on your hands. Doesn't mean the guy is a full blown alcoholic destined to sleep in a skip but addressing it before he gets there is probably the key .

Man gets pissed and wets the bed. Hardly that interesting. If that worries them, the harpies on Mumsnet should visit a rugby club on a Saturday night...