Boo to the Twitter bot which got far more traction by adding the difference between the women's and men's median hourly pay. Merciless. 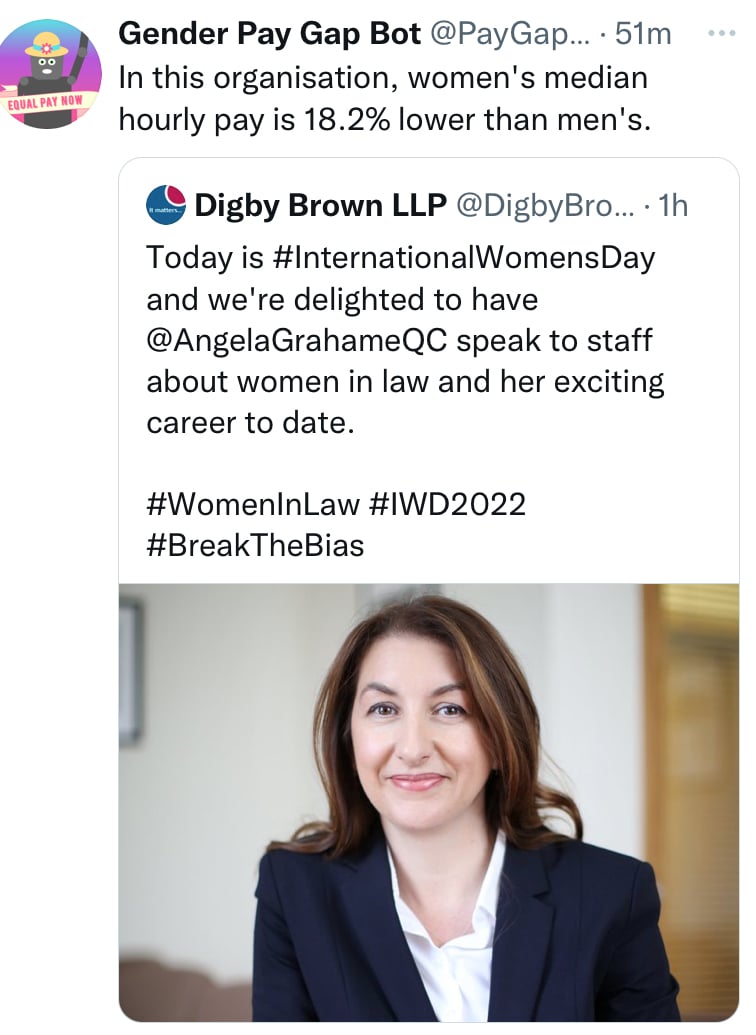 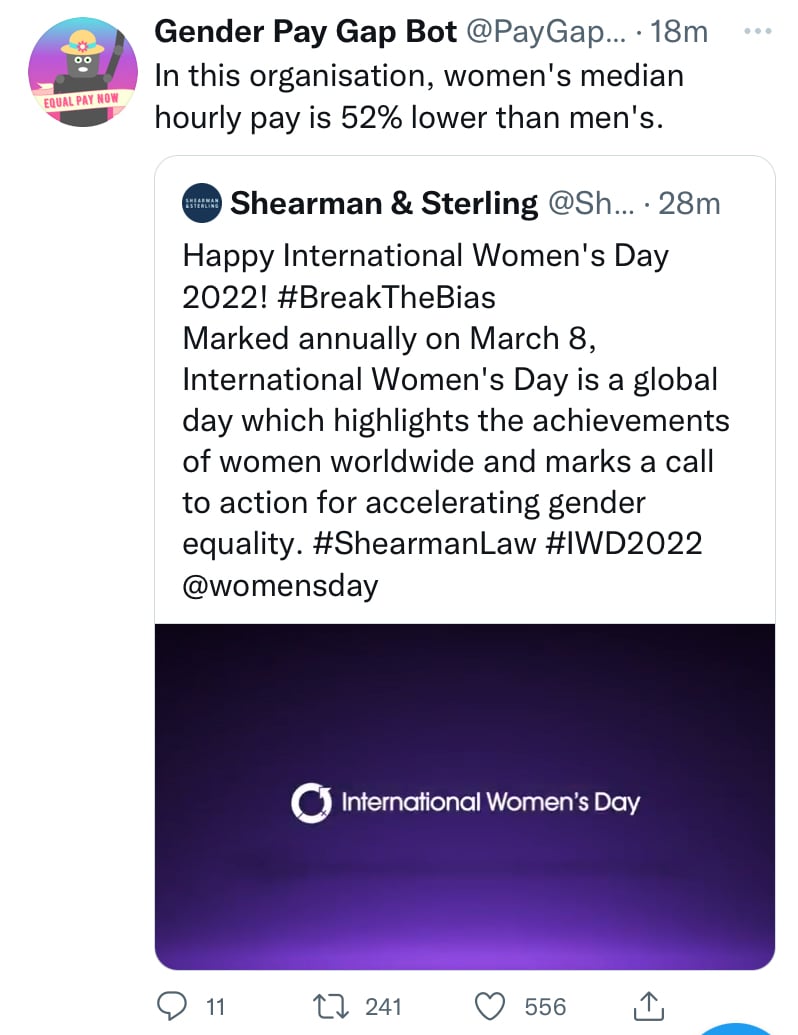 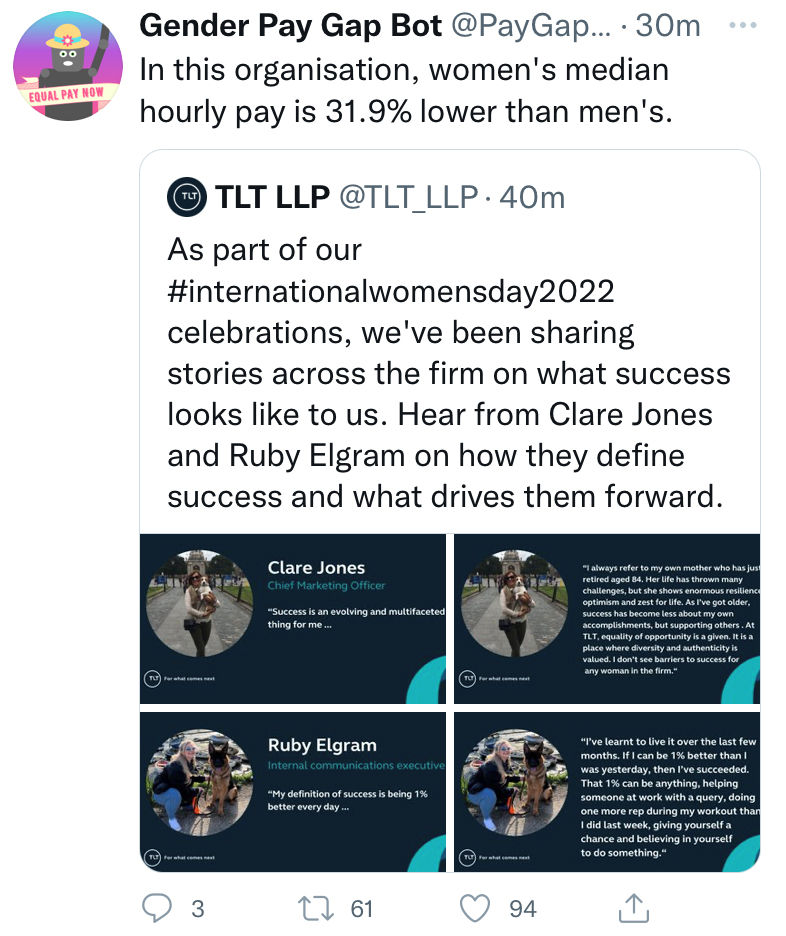 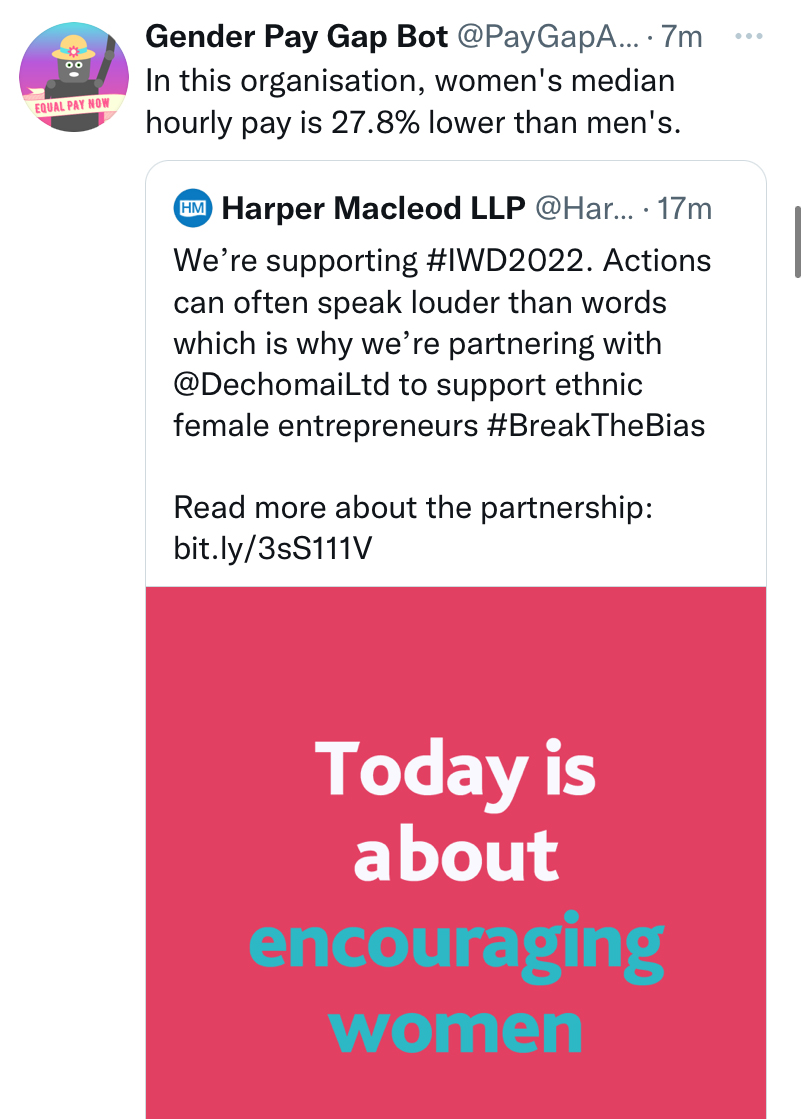 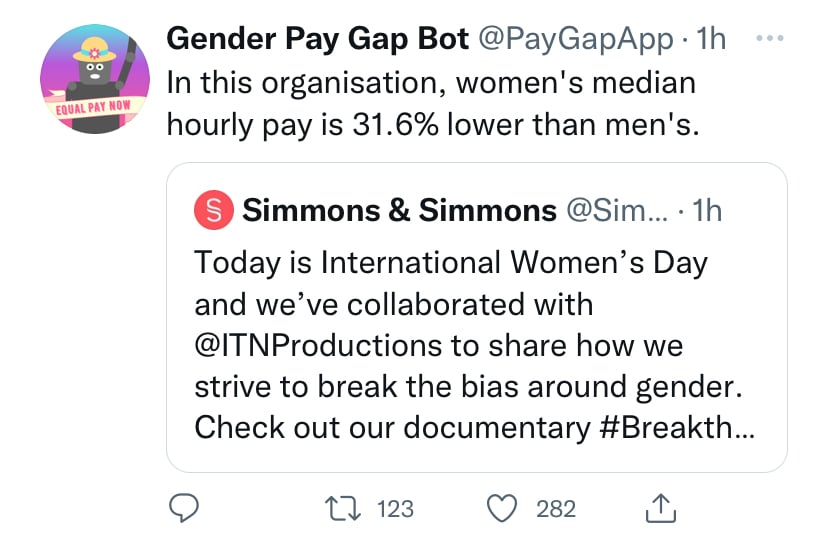 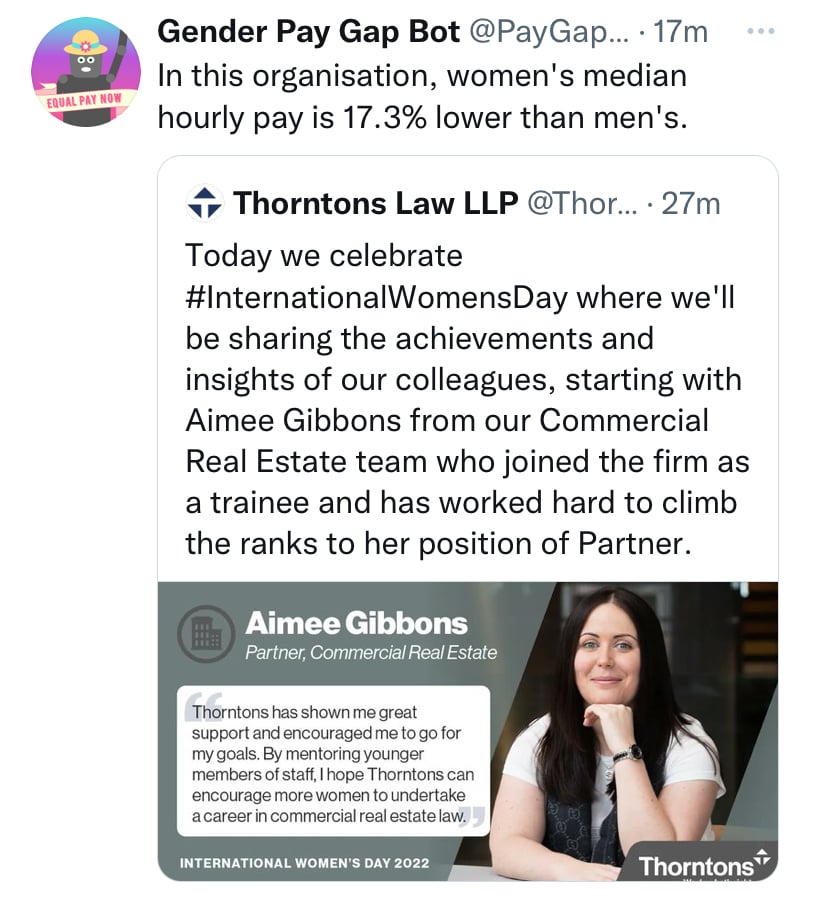 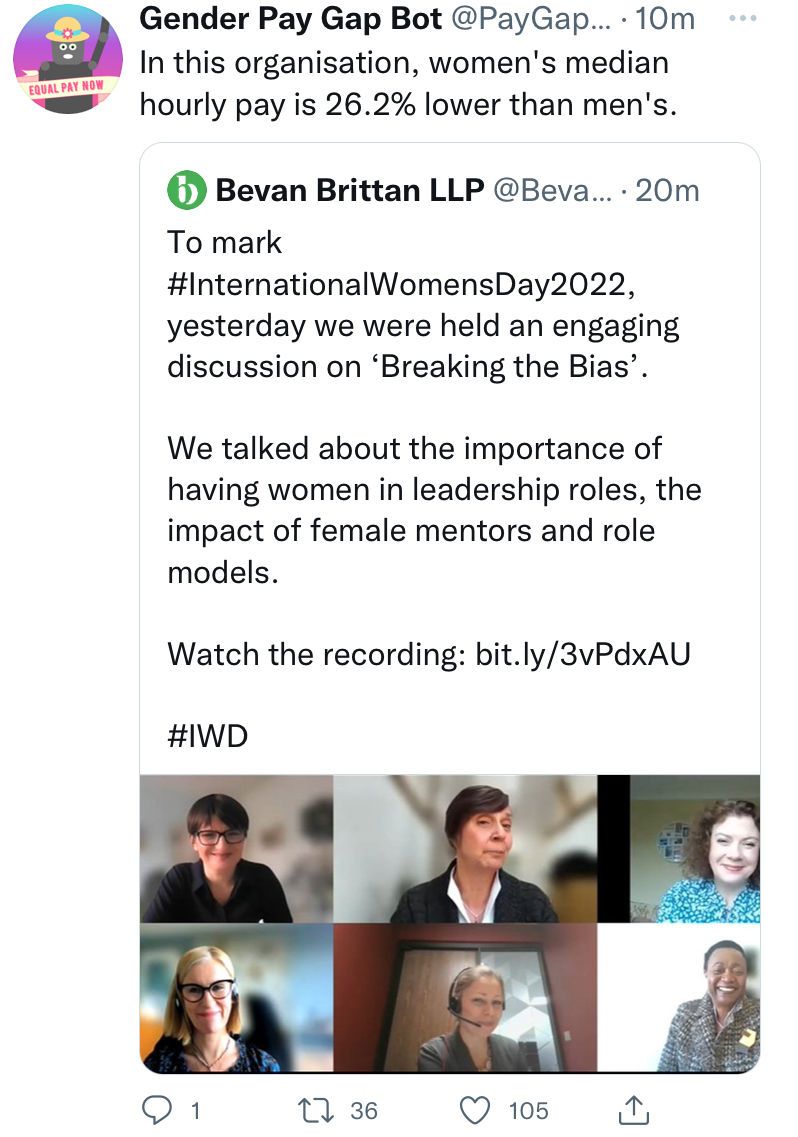 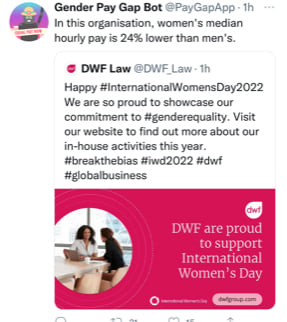 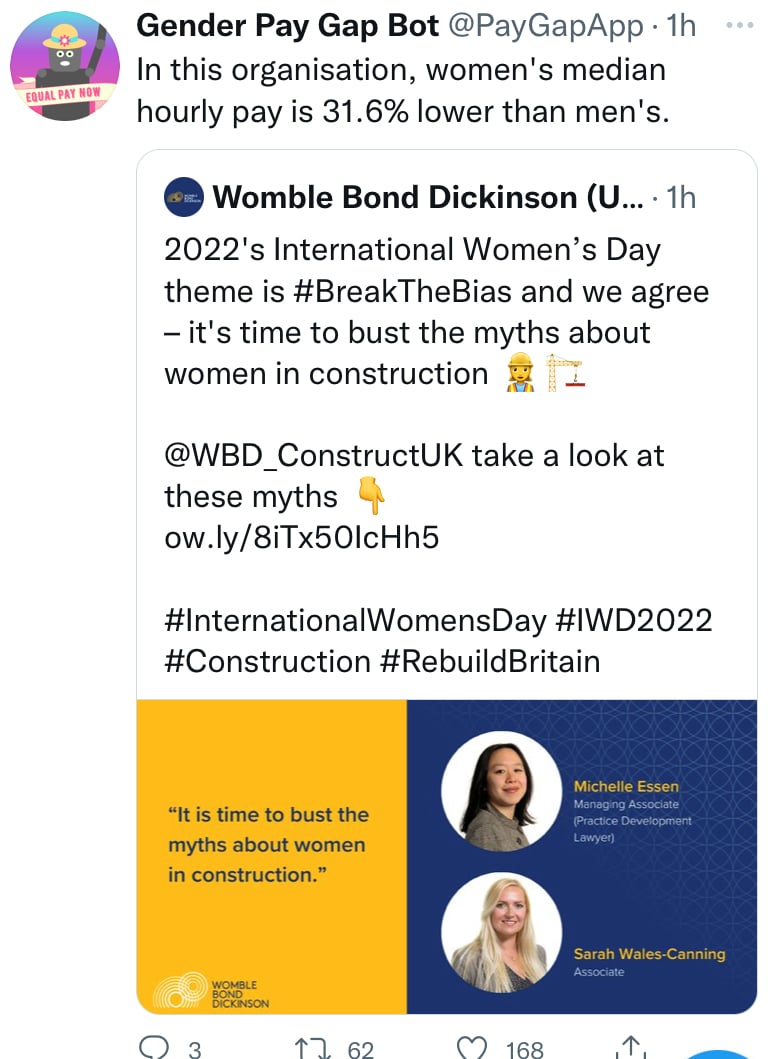 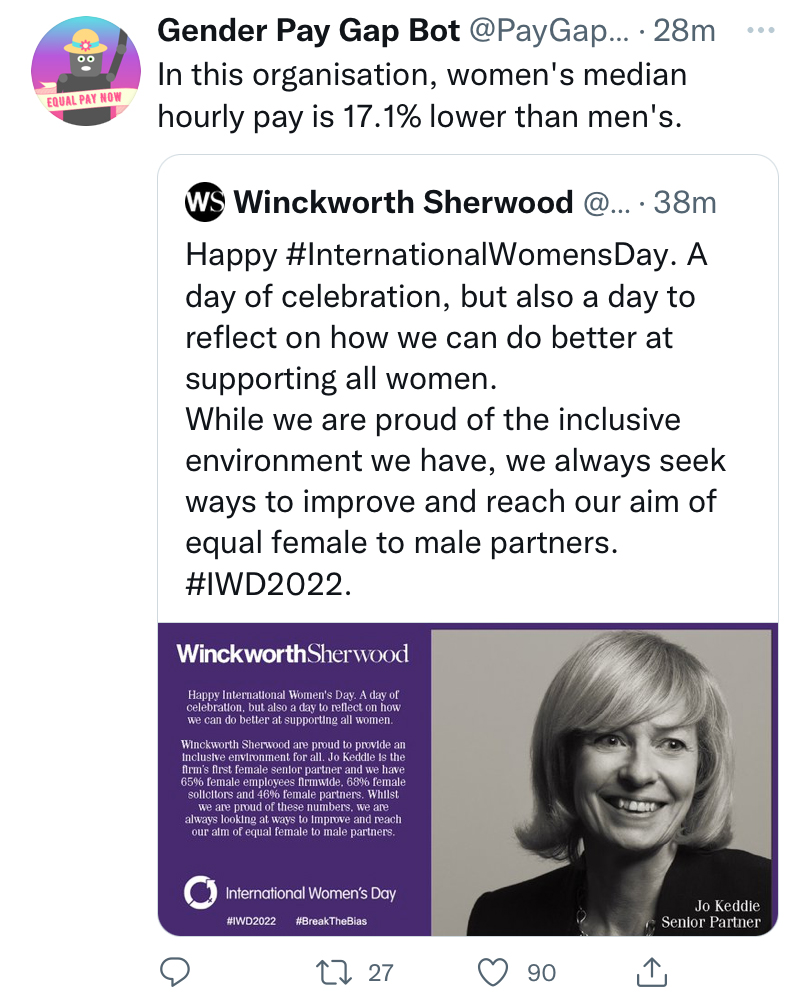 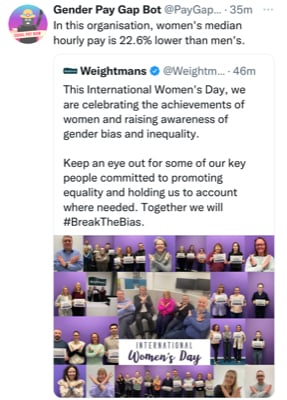 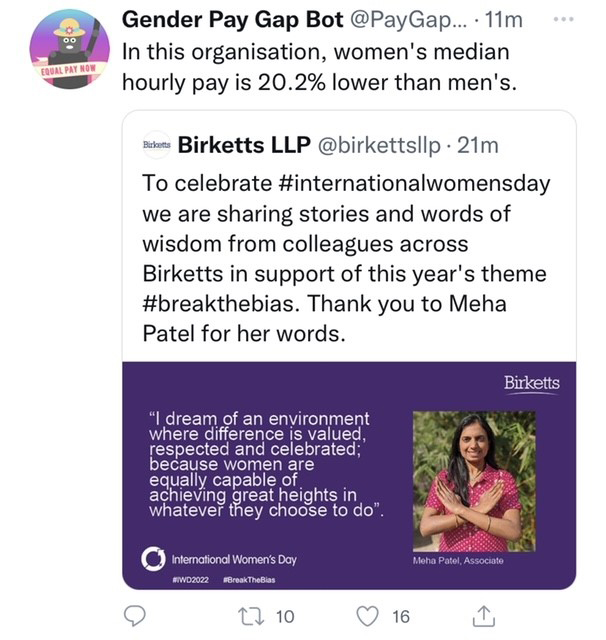 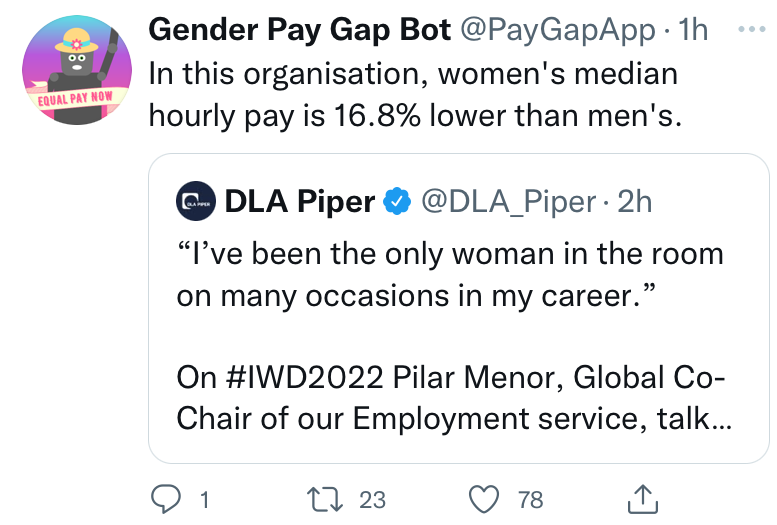 Even the law socs got dragged. 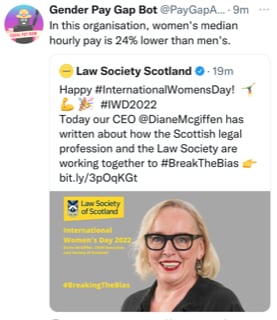 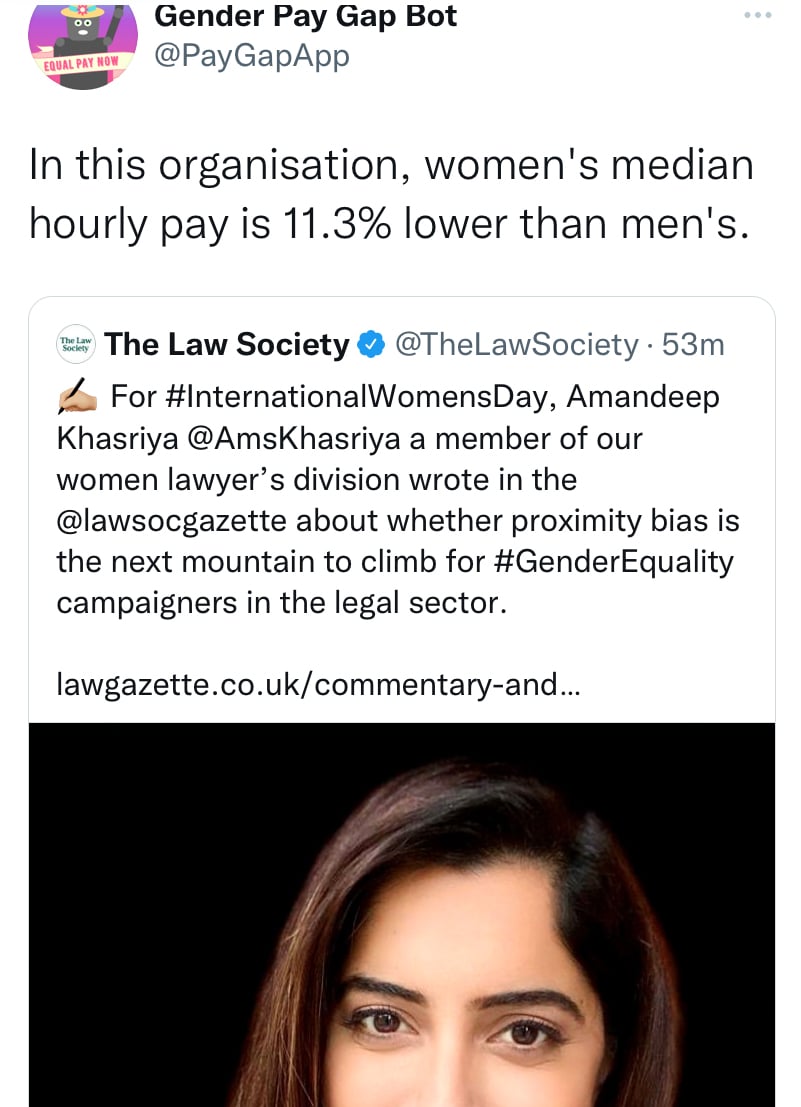 It proved too much for Ward Hathaway:

The disparity between male and female pay in private practice has sometimes been explained as the consequence of women occupying more PA roles than men, but it's not much of an excuse, especially given the female brain drain which afflicts a firm's lawyers as seniority increases.

It's also worth noting that law firms' pay gap reporting usually doesn't include the partnership, which tends to be male-dominated, and means the true disparity between male and female pay at most firms is likely to be significantly higher.

The scarcity of women at senior levels is a source of embarrassment the profession has grappled with for years, with varying degrees of success and seriousness. Flexible working, part-time career paths, unconscious bias, sexism - it's a complicated area, but one rule holds true: check before you post. Take the Asia Managing Partner of Freshfields (16.8% pay gap, apparently), who came out with a strong show of IWD support on LinkedIn and blew it within two sentences.

Thomas Ng congratulated his female colleagues for getting where they had because they "refused to be daunted by bias and inequality" and were now "deservedly reaping the rewards". Some suggested that his joyful take implied that bias and inequality was something women just had to deal with, and that women who hadn't overcome it were simply not ambitious enough.

Affronted women included former Morgan Lewis and Baker Botts partner Amy Conway-Hatcher, who commented, "Respectfully and sincerely, I'm hoping men in positions of power who are no doubt well-intentioned don't offer words of congratulations for sticking it out in unfair competitive environments".

Ng responded, "I fully recognise that there have been many talented females who have been unfairly held back from achieving their full potential, or from receiving the recognition they deserved – this is the bias and inequality I wanted to acknowledge in my post".

He said he was proud of his firm’s commitment to achieving better gender diversity, stating that "one of our targets is that by 2026, new partners should be 40% women, 40% men and 20% men, women or non-binary", and that "I believe that we are probably more clear-eyed about the challenge we face than we have ever been". The bot is on standby.

Unless gender pay gap data breaks down the split between role and experience, it’s pretty much a useless statistic isn't it? Like for like comparison would be far more useful wouldn't it?

And should we rename it the Sex Pay Gap given that gender is widely agreed to be an invented construct?

It's probably fair to say it's a clumsy metric in its current form, although as a broad indicator I guess it has some use?

@Private Santiago, fair point although it still shows that women, on average, are paid less for their labour than men. I mean, you are aware of the equal pay cases (Tesco and Asda) where some forms of work, mostly done by women, were compatible to that of the type of work mostly done by men who were paid more (shop floor vs warehouse). Granted those workers only won the right to take further action but the point remains that women’s work, historically, have been lower paid than mens’ work.

If you want to drill down into the data to show different role and experience splits then you are effectively saying that it's ok that nearly all support roles are performed by women and that most senior partners are men. The whole point of the data is to highlight why there is not a near equal split of men and women in all roles. If your answer is "well working mothers" then I ask you "why not working fathers?".

@Dearie - don't conflate the outgoing crop of parents with the fresh intake. I and all the dads I know of in their 20s and 30s  share all the responsibilities. Our parents generation, who are at the top of the tree for the time being, are from a time when one good job (husband, obvs) was enough to raise a family and have wife stay at home. for better or worse that just isn't feasible for most young families now.

I'm pleased to say I work in a firm that has an even split of men and women in both fee earning and partnership roles. Those types of firms aren't the norm though, and they should be.

Just going for the median is oversimplifying an incredibly complex area with lots of different variables at play.

Just two of those variables are:

2. the biological fact that only women can bear children, and the ensuing practicalities

Do these have absolutely no input into the "gender pay gap"? People don't like to talk about these things because it's uncomfortable. Because it creates cognitive dissonance in the minds of those who believe that equal outcome is the same as equitable outcome. Because you can't have an open discussion these days without some numskull refusing to engage in the subject matter and instead branding you as a misogynist dinosaur.

Factor in the public perception/PR angle and you create an echo chamber of people and organisations who are afraid to think freely and critically (or at least to voice any such thoughts or questions) - it is safer for them to go with the flow of social and public pressure, and to create arbitrary metrics and targets.

Is the pay gap a blunt measure? Yes. Despite this, does the bot highlight that pretty words on social media does not level the playing field? Also yes.

Does it also show where women earn more than men?

If the Freshfields partner said nothing, he would be wrong.  So he shows appreciation and recognition to a well-know struggle, and he is still wrong.  Who could ever be right?  I suppose only those who complain.

Yes the poor Freshfields partner is the real victim here

Yes, Jordanian he is.