To illuminate the workings of this august institution as it heard from one side that Johnson was a pro and from Baron Pannick that he was a rogue, scholarly legal types were prompted by The Secret Barrister to take to Twitter with the hashtag #SupremeCourtFacts.

We learned a lot.

There’s going to be a lot of misinformation over the next few days about the Supreme Court, so as a public service, I’d invite lawyers to share some little-known legal facts. I’ll start:

Each Supreme Court judge enters court to their own Diana Ross song.#SupremeCourtFacts

The judge who does a full swivel on their chair when he/she sits down at the start of the hearing is the one who will write the leading judgment. #SupremeCourtFacts

While in court, judges sit barefoot with their feet in a small paddling pool so they can "draw upon the wisdom of the sea".#SupremeCourtFacts

Lady Hale was appointed President of the Supreme Court after catching, gutting and consuming a wild boar in front of the horrified selection panel #supremecourtfacts 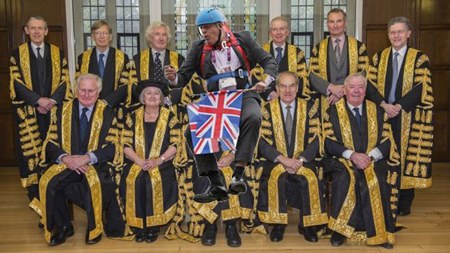 It's all just a bit of fun! For God's Sake start stockpiling medicine

All Supreme Court judges must be wider at the bottom than at the top. This prevents them from being overturned. #SupremeCourtFacts

After the hearing, or "match" as its technically termed, the Judges retire to their team facilities for a warm down and wintergreen rub #SupremeCourtFacts pic.twitter.com/VtcVb4baJ2

Every judge is paid directly from EU funds and is an openly gay fencer. All judgments are approved by the President of the Commission. #supremecourtfacts

When the Supreme Court isn't sitting, each judge is kept in stasis by having all the water molecules removed from their bodies. For this reason, the SC needs advance notice, so they can soak each judge for 48 hours in warm water; like a Pot Noodle. #SupremeCourtFacts

Lord Kerr is infamous for going to fancy dress parties dressed as a bear, regardless of the actual theme #supremecourtfacts

Only one of the above 'facts' is true.