A 'heart'-y welcome to Wilson Barca, which isn't afraid to butcher the English language in its quest for clients who understand that it's not being sloppy, it's being clever.

The headless thumb man isn't particularly clever, but wait for the accompanying text.

Comparing a law firm to a "carcass" is "brainy" and the firm has "toe" tally "nail"ed it.

The more usual phrase is 'no-frills', but an absence of 'added frills' also works, and Wilson Barca's stance is commendable. City firms spend a fortune on giant atria. Why? They're fat. Remove. Get in via a manhole.

Wilson B also promises clients that they will not find the "shows as of a big city firm". That's more of a loss because everyone loves Clifford Chance bringing out Pitbull at the end of a closing, and Def Lepperd’s residency at Dentons has been a real draw.

A lot of people think that when you matriculate you enroll in a class, and that it's when you graduate that you have the opportunity to be at the top of it. Not so.

'Most' effective! You've cut too much fat, Wilson! You're excising healthy tissue!

Elsewhere, Wilson Barca has not yet uploaded details of its practice areas. This is only because it's obvious what they are. The same picture of a smiling couple appears in every section, which is initially jarring on the Divorce page. But soon you realise that divorcing via Wilson Barca will put a smile on both your faces. Instead of separating in an atmosphere of hostility, you'll consciously uncouple and probably end up accompanying your ex and your best friend on their honeymoon.

It was canny to litter the careers page with errors. The worst mistake a job applicant can make is getting the employer's name wrong, but Wilson Barca has done it itself. What better way to filter out the inattentive. 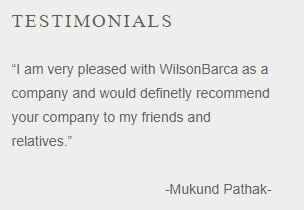 There is only one, short testimonial but Mukund manages to squeeze in a couple of deliberate errors, too. He definetly gets it.

if you think that’s bad, look up the way in which American Football has (mis)used the word for the past few decades...