Skip to main content
Outstanding marketing as Withers partner dispenses grouse-shooting advice in Tatler
Withers is one of the City's oldest blue blood private client practices. And with a highly aristo-dependent business, it needs to market itself in the right places. But the appearance of partner Bertie Hoskyns-Abrahall (yup, really) in a Tatler column on how women should behave on a grouse-shoot (yup, really) surely marks peak Withers.

From the August issue, "The Rules for wearing make-up during the hunting season": 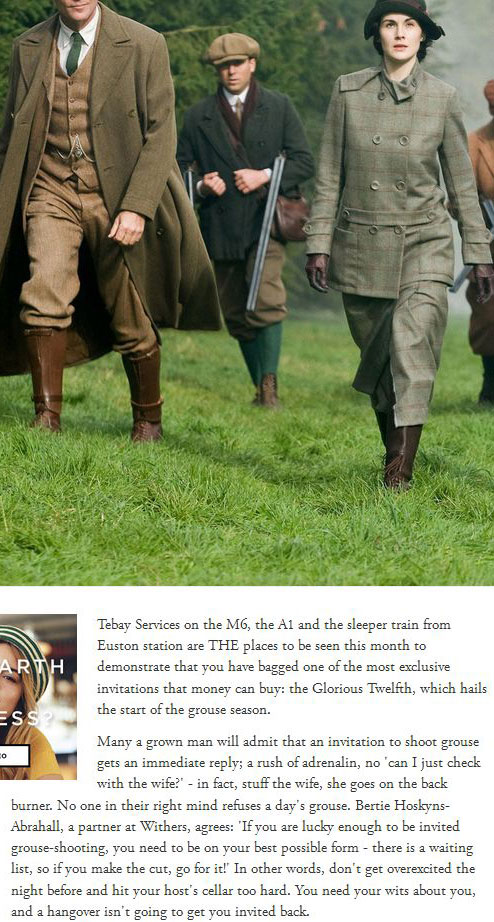 Stuff the wife! Quite so. That should do the trick. As a roffer comments on the board, Bertie "no doubt brings in boatloads of work from chinless mates". As for those tips, ladies:

What, you didn't think it would be tips on how to shoot, did you? You wouldn't want to shoot a nasty gunny-wunny anyway. Your lickle hands would shake too much and your soft, liquid eyes would be dazzled by the bright sky. And you'd cry too much. And everyone knows grouse shot by ladies tastes like polystyrene. Either get in the undergrowth with the other birds, or dress the colour of a bush and sit three paces behind me and keep your mouth shut. And for God's sake, if it's that time of the month, stay at home, you'll rattle the dogs.

Of course all that is on the author, not Bertie. Bertie!

There are other contenders for the most Withers moment. Another roffer recalls the negligence case brought against the firm in 2012, which revealed that one of its senior lawyers had proposed that the whole nasty business might be cured with "a handwritten letter on Smythson paper and an invitation to drinks".
Category
Feature

How dare you. Bertie f*whitHoskyns-Abrahall*wit represents everything that is wonderful about England, and the law.
16
Vote up!
14
Vote down!
Studied "Countryside Management" at Newcastle and went on to make partner at 4/5 PQE? Nothing fishy about that.
14
Vote up!
19
Vote down!
Talk about being quoted (by ROF) out of context.

The only thing Bertie said was 'If you are lucky enough to be invited grouse-shooting, you need to be on your best possible form - there is a waiting list, so if you make the cut, go for it!' In other words, don't get overexcited the night before and hit your host's cellar too hard. You need your wits about you, and a hangover isn't going to get you invited back".

What has this got to do with Netia Walker's (a female and the author of the article) comments regarding females?
11
Vote up!
17
Vote down!
Presumably the point is that is was extremely unwise of him to have been quoted in such an utterly ludicrous article?

"Bertie acts as a trustee for a number of landowning families and thrives on the issues and challenges that face landed families" - e.g Whether to open 2004 pomerol or the 1998 margaux, and how to elimate hunt activists without police involvement.