Skip to main content
Norton Rose partner picks unfortunate role model in terribly timed interview
Until two days ago, Charlie Rose seemed like a safe bet if you were picking a role model of integrity and intellectual inquiry. A veteran US TV anchor, the hard-hitting 60 Minutes correspondent and host of his eponymous prestige interview show was the US equivalent of Jeremy Paxman softened with some Parky. He was avuncular but no pushover, hard but fair, a respected veteran trusted even by partisans. He was one of America’s last grand old anchors, and in 2015 he was awarded the Walter Cronkite Excellence in Journalism award.

And then on November 20th the Washington Post published allegations by eight women that Rose had contrived to appear naked in front of them, groped them and made lewd phone calls. His unsolicited shoulder rubs were known among female employees as “the crusty paw”. One woman recalled him attempting to force his hand down her pants while she wept throughout.

Rose apologised for his “inappropriate behaviour”.

The next day CBS fired him and cancelled his show.

Headlines like "CBS News, PBS fire Charlie Rose after sexual misconduct allegations", "Charlie Rose's actions do not reflect excellence in journalism" and "Three more women come forward with accusations of sexual misconduct against Charlie Rose" cemented his toxic status as another of the Gray Dorians, these reverse Dorian Grays whose portraits on TV and the red carpet remained clean and noble while, out of their make-up, they disported themselves with gross abandon off-camera, foisting their ageing jowls on juniors in the attics of studios, offices and hotel rooms.

But for forty years BEFORE 20 November, Rose's public record in broadcasting was impeccable. And it’s important to remember that when we consider the absolutely terrible timing of this interview in a trade magazine. 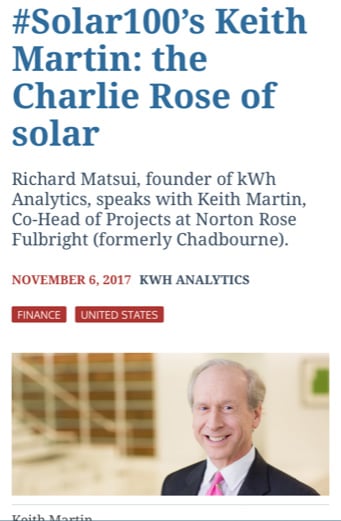 A source says, "I think the co-head of energy and infrastructure projects for the US at Norton Rose Fulbright probably regrets allowing himself to be described in these glowing terms".

Yes, it does unfortunately appear as if Keith Martin has been accused of groping his way around the energy sector (which is absolutely not the case) or possibly of flashing the sun in his bathrobe, which actually we should all do more often.

Years from now, solar lawyers will marvel at the good humour with which Martin took his comparison to a serial molester. “Even leans in to it”, they’ll say. 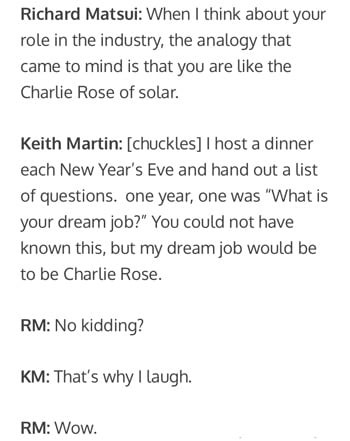 I think "Wow" sums it all up pretty well.
84
Vote up!
94
Vote down!
Why would Keith Martin even bring this up or laugh/try to make a joke about sexual harassment - is NRF (Chadbourne) still getting sued for discrimination against female partners?
93
Vote up!
95
Vote down!