For a while there it looked like apps might kill them. Bumble and Happen were going to replace the palm of your hand with the masses, by putting the masses in the palm of your hand. And everyone is on them. They haven't quite overcome the stigma of internet dating, but lying in a wedding speech is a small price to pay for the huge pool of candidates apps have opened up. No more dodging lonely hearts serial killers, no more marrying racist Ian the postman because he's the only single person you know.

But solving the choice problem has created a new one: too much choice. Bringing a huge field of mates into play has made people picky. Love is Chandlerised before it can blossom. His smile's too kind, swipe, her pupils are wet, swipe, he built a snowman, swipe, her hair looks hairy, swipe. Prospects who would have been shoe-ins before smartphones get depth-charged out of contention before they can even meet, denied the chance to prove that their off-putting face is actually ravishing in motion.

E-singletons are experiencing the heartache of rejection like no generation before them, because they are rejected by multitudes. As hundreds of crushes fail to reply to their pokes and nudges and winks, app users become by increments vast wobbling bags of vulnerability, one 'no match' away from bursting with defeat and flooding the whole carriage with curdled love, of which they had so much to give.

Let's go through his horseshit line by line.

If it involves jelly and smoke machines then you thought right.

Around 90 degrees until bedtime, then 180 degrees.

Sorry, different angle. What are "London's legal men", though? Over 18? And what is an illegal man? This sounds like a Dubai thing, like Dubai lingo and the definitions hinge on whether you were bussed in to die building a football stadium or flew in to oversee construction.

Quick, to the attachment. 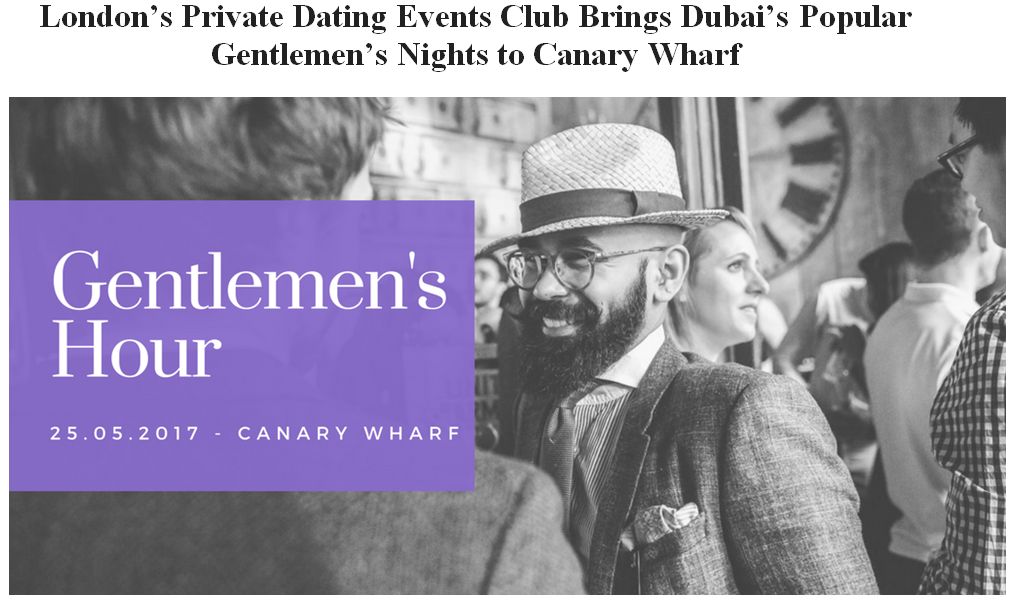 HOLY macaroons. Everyone appeals to someone. It doesn't matter if you're a bore who reeks of mice or Katie Hopkins, dozens of life partners are out there and desperate for you, willing to crawl over broken glass to jump your bones. You've just got to wade through billions more who would rather pluck out their own eyeball and leave it dangling on its gross cord and play swingball with it. But that's fine. The important thing is not to hide your niche. Lean in to your niche. This guy is. His niche is disguises.

Yeah! Exclusively for the L.A.D.S. bANTER! Anyone murdering prostitutes outside of the designated areas will be removed.

Is it because scientists want to observe how much spit drunken misogynists fleck on each other as they man-to-mansplain why women are cheap, in a room completely devoid of the opposite sex?

By my own logic, the men turning up to this - men sick and tired of getting a raw deal, men convinced that 'ladies nights' are engineered not to benefit them but to cuck them into betahood, men who think it would look pretty swag not to foot the bill and see the women pay for once, the bitches - will be exactly the type of fellows some women actually find attractive. It's a pretty freaky kink though.

In return, they'll have a room full of smirking, bitter and bladdered mens' rights activists to fend off and later testify against for sexual assault.

Ladies nights are not catering to women, Tom, they're catering to men by creating an environment - free drinks - which is attractive to women, to get them through the door. Also, when you refer to women as 'females' you make it sound like they are animals in a zoo and the men are zoophile interlopers who've scaled a fence with a bag of sugar cubes, wearing nothing but a fedora. It's creepy.

It was decided at the highest levels to decline the invitation:

So. Will you be going?

Yes. I'm going.
2
Vote up!
1
Vote down!
Very entertaining article. However, I don't understand why the event is sexist - i.e. why is it sexist if it's done for men, but not if it's done for women? Are women's attitudes to men by definition noble and proper, while men's attitudes to women by definition sexist and horrific? If so, that would explain it.
2
Vote up!
1
Vote down!
"grossly offensive and sexist"

Fragile people who need excuses for their foul personalities.
2
Vote up!
1
Vote down!