Skip to main content
Lawyer uses hilarious deaths to advertise his services
In a little-watched corner of Twitter, a Canadian lawyer is ploughing his own furrow.

Mark Kok is an estates specialist. His close proximity to death has diluted its impact. For him. For everyone else, his tweets about bizarre deaths followed by an all-caps reminder to 'UPDATE YOUR WILL' look a little odd.

Some might even say they're tasteless - but actually it's highly educational.

And a lot of the weird and ironic deaths Kok summarises are from ages ago, so it's ok to chuckle at them.

His 'funny but fatal' tweets means it takes a couple of seconds to realise it isn't another LOLdeath when he posts that his wife died of cancer. There's no invocation to UPDATE YOUR WILL in that one.

The cumulative effect is chilling. Partly because it's like being locked in a box with the Rain Man of death, and partly because the victims are posted chronologically, moving closer and closer to the present day. The unspoken threat being: your own demise, if it is sufficiently ludicrous, will one day appear as an M.A. Kok advertitweet.

He drops the smiley face after 21 people are wiped out in the molasses disaster.

I'm not sure why he thinks pre-1923 deaths are funnier, but who's going to question a man who makes those sorts of distinctions.

Today he shot forward nearly 20 years, and blundered into 'too soon' territory. 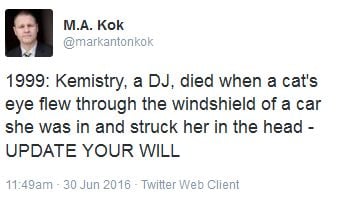 Not sure that's a gutbuster, Kok, or appropriate for an advert. It's just really sad. What's next? "Trayvon Martin died when he was shot by a man supposed to protect the neighbourhood - UPDATE YOUR WILL"  Time to rewind to the vintage deaths, or, even better, take some tips from The Texas Law Hawk.
Category
Feature