Yes, footballer, pundit and Strictly Come Dancing contestant Robbie Savage now works for a solicitors in the gritty Merrion Centre, central Leeds. His profile says he is a 'Sports Ambassador' for the firm. Hopefully it just involves taking a cheque and showing up at the Christmas party, because Savage's forays into law haven't always gone brilliantly. Like the time he lost his appeal against a £10,000 fine for voiding his bowels in the referee's private toilet, in an incident which came to be known as 'Poogate'.

Even so, it's puzzling that of all the possible athletes available within its price range, Blacks Solicitors chose Robbie Savage to be an ambassador. He once held the record for yellow cards, was infamous for diving and was so disliked that whenever someone kicked the ball in his face (which seemed to happen remarkably often) fans from both teams would cheer. He also never played for Leeds. In fact, he once called Leeds fans "mindless idiots" after they pelted him with hot dogs.

But apparently Savage has come round to working there. His profile even lists his direct line: 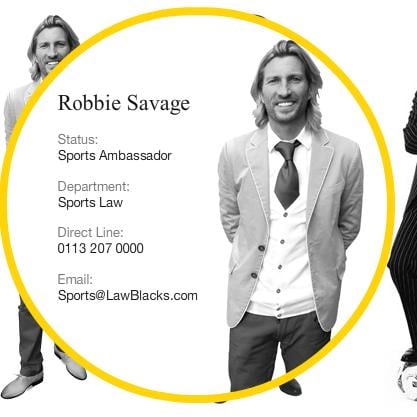 Although that didn't go very well.

Jamie: "Hi, can I speak to Robbie Savage please."
Secretary: "He's not actually in the office, sorry."
Jamie: "Will he be in later this afternoon?"
Secretary: "No, he won't, sorry, no."
Jamie: "Does he come in at all?"
Secretary: "He doesn't come in on a regular basis, no."

Probably for the best. He may have an elegant feathered mullet and a tie knot the size of a pear, but he'd be diving onto the lino and clutching his face every time Brian Deane asked if he had capacity. And Chris Allen clearly fancies himself as the office's star player, anyway.

Thanks to the roffer who spotted Savage after receiving a recommendation for Blacks, for its conveyancing.

I am the office star player!
45
Vote up!
89
Vote down!
^^^^^^
Chris Allen (No.9)
44
Vote up!
64
Vote down!
Brian 'Sheffield Utd & England' Deane? Their recruitment policy seems geared towards the inter-department footy tournament!