A convicted rapist and paedophile has demanded RollOnFriday desist from naming him.

The ex-Baker McKenzie IT partner, 'Daniel K', was sentenced to eight years in prison and a stint in a psychiatric hospital by a German court in November 2017 for raping two tourists and possessing a vast amount of child pornography.

While he was an IT partner at the firm, Daniel K lured female tourists to his house by renting out his spare bedroom. On two separate occasions he laced their drinks with tranquillisers, watched on a baby monitor from the next room until they were unconscious and then sexually abused them, recording his assaults on the monitor.

The partner, then 40, admitted the charges, although he sought to blame his crimes on a "heavy workload" and the death of a mentor. 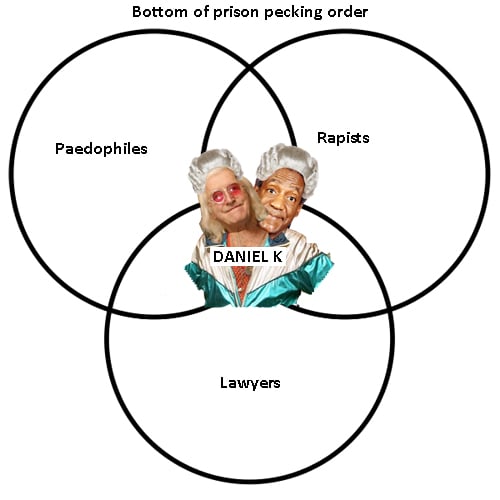 RollOnFriday named the boss-level deviant when it broke the news of his conviction, but this week Daniel K got in touch from the prison library claiming that inclusion of his name breached his privacy rights under the European Data Protection Regulation (EDPR), and that his identity was no longer in the public interest.

"The news report mentions my full unabbreviated name", emailed Daniel K, "thus making me personally identifiable in connection with the subject-matter of the report, including the special categories of personal data contained therein (data on criminal convictions, data on sexual orientation), beyond a reasonable period of time during which there might have been an imminent public interest in such information, if any".

Its inclusion, said Daniel K, "invades my privacy rights under the EDPR" and "undermines my legitimate constitutional interest in rehabilitation".

Daniel K failed to specify how the EDPR applied, or why naming a biglaw partner recently convicted of heinous offences was not in the public interest. But RollOnFriday knows very little about German privacy law (nothing, in fact), so agreed to anonymise him. However, if there are any readers expert in Munich criminal and privacy law, do let RollOnFriday know if Daniel K can be named, via the comments or by emailing [email protected]

Probably meant GDPR. It's a pan-European regulation, so you don't need an expert in German law. And just to be clear: by Europe, I mean all the EU countries including UK, still :)

Drop Bakers an email and ask for some pro-bono legal advice.