Clive O'Connell, a partner in the London office of US firm Goldberg Segalla, also called them "scouse scum idiots" in the interview, which was filmed as he left Stamford Bridge following Chelsea's defeat to Liverpool. On Twitter he told a Liverpool fan, "Crawl back to your horrible Merseyside home".


According to his profile on the Goldberg Segalla website, O'Connell is "one of the world’s leading insurance and reinsurance legal professionals". Following Chelsea's 3-1 defeat to Liverpool last Saturday, O'Connell was challenged by an interviewer for Youtube football channel Neeks Sports about Chelsea manager José Mourinho. In the video, an irate O'Connell replies, "Who's better than him? You name one manager in the world who's better than him".


When the interviewer suggests Ancellotti again, O'Connell launches into a rant which means he probably shouldn't go to Liverpool on his own, ever:

"Not as good as Mourinho. And he's a lot older as well. He's not a long-term proposition. Mourinho is a long-term proposition who is the best manager in the world. Everybody knows that. Why do you think it is [that] the scouse scum were singing, 'You're getting sacked in the morning,' [and] not what we sang to Benitez - 'we want you to stay' - when Benitez was managing Liverpool? Because they know, even those scum scouse idiots, those nasty, horrible people, know that Mourinho is the best manager in the world and that he should stay here. They're scared".

In the interview, which was posted on Facebook as, 'A Chelsea Fan Gets Angry And Blows His Top When Told That Mourinho Is Rubbish', O'Connell claims that the FA "have an agenda against Chelsea" and that they have problems because "the FA is led by a corrupt man". However, it is his views on Liverpool which have provoked anger. O'Connell's rant has clocked up over 355,000 views and over a thousand comments, most of which are less than complimentary: 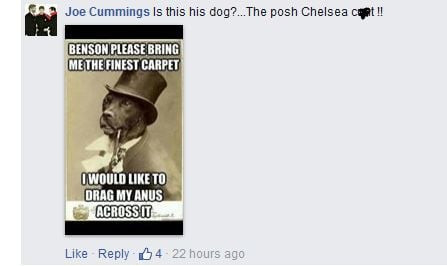 O'Connell told RollOnFriday, "It was a hot headed and regrettable moment in which I allowed myself to be overtaken by emotion. I am much chastened".
Category
Feature

What a massive bell end.

Anyone told him about the ranting idiot he hired in London?
1
Vote up!
1
Vote down!