Charlie Martin has resigned as Senior Partner of Macfarlanes.

It is very low hanging fruit, I know, but I had to take the opportunity to give greater publicity to this OUTSTANDING valedictory photograph tweeted by the firm: 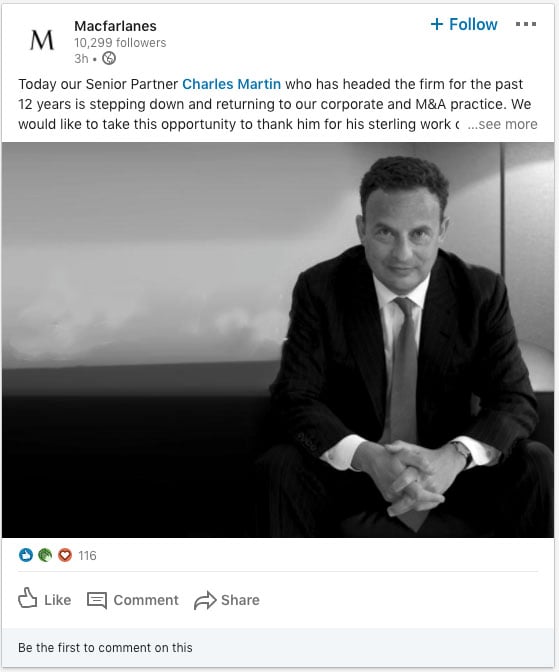 It looks like the cover of a Bryan Ferry album...

I occasionally write these things when people step down. Generally about those whom I do not hold in the highest regard, such as Mark Dembovsky and Nigel Savage. Perhaps not my finest moments, and no doubt they speak well of me... But it is a sweet and glorious thing for me to able to pen a few words of 24 carat, unalloyed praise about one of the greatest figures in our profession without a barb or a slight.

I declare an interest that should probably preclude me from writing anything at all about Charlie. We are proper mates going back well over a decade. This is not just a nodding acquaintanceship over the occasional pint. We try and catch up to put the world to rights every couple of months. He always focusses intently and pulls his leather notepad and fountain pen from his pocket to jot down a couple of vignettes for later perusal. I do the same, he gives far more than he takes... We last met a few weeks ago for a virtual coffee in isolation. We caught up in person just before the lockdown for a good natter over a meal, and as we left a nebbish bounded over to kiss his arse. And all Charlie could focus on was hearing about him, and showing that he clearly thought that he was important and interesting.

Which is all Charlie ever cares about, and why everyone loves him. He has run one of the finest, most profitable boutique law firms in the world and left it in far greater shape than he inherited it. He makes time for everyone. He shows genuine empathy and concern. He is much more interested in listening to others than talking about himself. He always does what he says he's going to do and he attends everything. He is one of the few people in legal London about whom no-one, but no-one, ever has a bad word to say.

He is so on brand with Macfarlanes that if you cut him in half it would run through him like a stick of rock. One of the few, proper, quality senior partners from the cohort of Stuart Popham at CC, Guy Beringer at A&O and Chris Carroll and Alasdair Douglas at Travers. He is staying on at Macfarlanes for the foreseeable, although will not be on the board. He'll eventually leave and end up doing something fantastic, I don't yet know what. His replacement Sebastian will have enormous shoes to fill.

I will be roundly criticised for this as a massive arslikan job, which I suppose it is. But it is true regardless. Charlie is the real deal and his departure is a massive loss both to Macfarlanes and the City.

What have you got against Dembo?

I pity the fool! Lawyer 'apologises unreservedly' for blacking up as Mr T
Lands whole firm with extra diversity training