Skip to main content
Allen & Overy keeping on 86% of Autumn NQs
Allen & Overy is retaining 86% of trainees qualifying this Autumn.

James Partridge, partner and training principal, said, "this is another pleasing result which demonstrates the consistently high standard of the trainees here at A&O, as well as our commitment to supporting their long term careers with us."


It does follow a really strong result in Spring, when the firm kept on 43 out of 46 of its March qualifiers - 93%.

Last year, A&O managed 82% in September, when 41 of the 50 trainees joined as NQs, and 84% in March. The results appear to reflect increased demand for NQs after A&O slashed the size of its intake by around 25% when the credit crunch bit. In 2013 its retention rate with the larger cohort was considerably weaker. 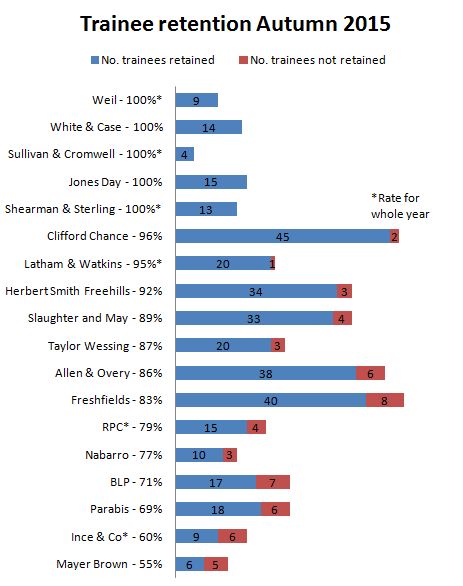 A&O is the fourth Magic Circle firm to unveil its stats. Only Linklaters has yet to go. So far none of them have soiled the sheets, with Clifford Chance doing particularly well on 96%.

BLP has also released its retention rate. Its 71% is rather less impressive - but at least it didn't fiddle the figures this time.
Category
Feature