The most inept Cabinet Minister

This is actually quite tough.  Hancock is a total wet blanket. Imagine being on a deal and being introduced to him as the partner on the other side?

Priti Patel is clearly an utter utter moron. Perhaps she is effective though? An one trick pony (racism), but what a trick!

Jenrick can’t be that thick but his wee micky starts throbbing anytime he gets a whiff of the cashiers aftershave.

Boris is obviously completely unsuited to almost any serious job.

Hancock actually reminds me of a lawyer I know.

It is a race to the bottom with the ministers atm. I think the leader of the pack is PP. Feckless.

Raab is the Tory Dianne Abbott.

Patel is not effective.

She is the first Home Secretary for a very, very long time, perhaps since police stations were invented, whose constituency possesses not one single police station (the last one was closed in 2016).

She’s a fraud, operating way out of her depth, who retails a glib line in populist, hard right “thinking” but has no idea how to implement any of it and bullies those who do and blames those reporting to her for her own failings.

The public accounts committeejust brutally ripped the Home Office to shreds. Policy based on prejudice, assumptions and anecdote, not evidence. £400 million spent on immigration issues for which the Home Office has no idea how to assess whether it is actually achieving its goals.

Jenrick has drawn all the wrong conclusions about ethics and responsibility from working for and with oligarchs.

I’d let Patel carry me off to her shack for a shakedown. Can’t say that of the others.

I was talking to a couple of aussie bankers about that fucking idiot ScoMo the other day, and it was hilarious how swivel eyed they got having to acknowledge that yes, he’s an absolute tool, all in the knowledge that they voted for him anyway because he’s from the low tax party. Rumbled, lads.

The entire cabinet has something of the shite about it.

Literally not one member of it has an iota of sense, principle or competence.

Sunak the possible exception but a bit too early to say.

I remember being at a dinner once in the NHM where the guest speaker was a senior cabinet minister.  He walked accidentally into an exhibit of Neanderthal man which would have made an ace photo for the front page of the sun

The thing about Patel is she’s approximately as broad as she is tall.

She dresses well and I‘m personally not averse to a bit of, er, voluptuousness.

"Hancock is a total wet blanket. Imagine being on a deal and being introduced to him as the partner on the other side?"

HEH! As if transactional lawyers are known for their chutzpah and charisma.  Is the personality of a fucking paper pushing solicitor really the best we can hope for in the highest offices of the land?    As far as most people are concerned the lawyers involved in any deal they are the dullest people in the room.

Liz Truss IS. A. DISGRACE.

Buckland is turning out to be an even worse Justice Secretary than people who weren’t even lawyers.

Shapps is a dodgy used car salesman/writer of “how to get rich quick” books and scam artist.

Non-entities and fuckwits, the lot of them.

Don’t disagree Jack... ...but if you look across the dispatch box you’ll have apoplexy.

Perhaps a political career isn’t a magnet for the brightest or morally sound...

Rayner is a little weak but appeals to an important demographic  (and is miles better than Marxist Barbie Becky Wrong Daily).

Cooper and Benn have been good.

There’s talent on the Labour benches.

The Tory benches have been stripped of any talented, principled politicians and stuffed full of yes-men and -women, lunatics and spivs.

The talent on both sides is palpably far lower than a generation ago.   I don' think this is because politicians are necessarily more inept generally, there is a lot of talent on the back benches but because people are now selected on basis of loyalty to the leader, or strand of the party rather than executive talent.    The most successful governments of modern times Thatcher, Major, Blair had huge cabinet rows but talented people would be accommodated even if they were not on exactly the same page as the leader.

Cooper and Benn have been doing an in some way more important (and better remunerated) job chairing committees.

Were Starmer to be forming a cabinet I don’t think he could afford to do without experienced grown-ups.

And I think people like Burnham could be drawn back to national politics. He seems to have done OK as mayor of Greater Manchester and has been rattling the right cages over poor information flows and governance from central govt over Covid.

Sorry Jack, I thought we were having a moment of non-partisan bonding...

it's difficult isn't it - they are all useless, save for Sunak who seems quite good

I think the worst is probably BJPM, because he is lazy, mendacious, vindictive and yet has an unshakeable self confidence, which is a pretty toxic combination for a leader

I’m not a Labour voter. I just think there’s a little more to hope for on that side of the aisle at the moment.

I usually vote Lib Dem or - these days - green. But the Lib Dems are in a horrible state. And Caroline Lucas is a force of nature but there’s only one of her and although she’s right about some things, she’s too far left on others for my taste.

I think a lot of the current shitshow probably goes back to the 90s generation of school leavers slightly complacently thinking life would go on like that forever. The minority voice when I was at uni (and the people who cared enough about shaking things up to actually properly engage in politics) was right wing/Brexit-y even then.

Apart from tuition fees protests, the left wing and liberal centre and centre right have been pretty apathetic and focussed on making money and having families. And now we wake up and to our surprise find out that the lunatics, cranks and single issue obsessives have taken over the show.

Gonna be a long walk home.

I think this is broadly right Jack.   The problem is that the second world war generation have now mostly died out and people have become complacent.  They think that a stable peaceful existence is pretty much guaranteed and not something that has to be constantly worked at so they can throw a few grenades into the hold, confident the ship wont sink.  Trouble is it has before and will gain

Major didn’t feel all that successful at the time!

But it was better than this. He was probably rather unfairly judged at the time.

And there were more experienced heavyweights operating on both sides of the House 25 years ago (eek!!!).

The generation that is 60+ and endlessly wanks on about “ten War” despite not having lived through it is one of the big demographic issues driving our politics.

An awful lot of late middle-aged to pensioner white men and women who didn’t go to university (and often have a bit of a chip on their shoulder about grammar schools), have made it through life OK and worked hard, don’t identify with metropolitan cities and liberal values, don’t have a lot of diversity in their social circle and do worry that there are no decent jobs for their kids and grandkids locally and little by way of a realistic route to them buying houses locally.

They lap up Farage’s narrative of white paranoia, inverse discrimination and xenophobia and the culture war nonsense that Cummings, Gove and Johnson exploit.

The War, not ten war, obvs.

I think it would easier to have a thread on the most competent cabinet minister.

Which is clearly Gove, coke-addled swivel-eyed policy wonk that he is.

I know he chap who used to work closely with Gove and he said that he was massively competent.  Wrong, but very much on his brief.

Compare this lot however to the Wilson or Thatcher cabinets and you can’t help but be appalled by the talent deficit.

I think we need to disentangle ability to think and speak quickly etc from ability to be a decent cabinet minister, albeit there's a natural tension between the two.

Gove has a brain, but unfortunately doesn't seem to use it to good ends. The rest don't seem to me to have any ability to start with, and are often nasty with it.

Agree that Sunak may - may - be the only one who has some raw and applied ability.

Agree also about complacency, although I think it's the Brexit result that's really unleashed the hounds of hell. The coalition era fitted broadly into the Major onwards trend I feel. Whereas post Brexit vote (and I voted for it) we're in a whole new world. And it's a worse one.

Thatcher - transformative but overly combative. Still class. Not afraid to take a decision and stick to it (like Livingstone

Major - better than he looked. But how a politician looks is rather an important part of the job. If only he could have shaken the pomposity, but I think he feels it is part of what got him where he got.

Blair - pretty f'ing good with hindsight (this is not how I saw it at the time). But oh Iraq...

Brown - decent enough overall but not dissimilar comms problem to Major. I'll always wonder about how come that mike was left open with Mrs whatever her name was during the 2010 election campaign

Cameron - kept on waiting for him to turn up really.

May - utterly out of her depth. Similar comms problem to Major and Brown also.

Johnson - even worse than I feared. And I'm by nature and practice a Tory voter more than any other party. Not any more.

’Whereas post Brexit vote (and I voted for it)‘

Yep, I admit it. I'm one of those would like to be in EFTA or close equivalent, or even in the EU if only it would stop the mission creep. Single currency, army, foreign policy - no thanks as those things just don't work well enough. I'm all good on freedom of movement and goods and services.

With hindsight I'd at least abstain from the referendum vote.

You won, get over it!

Gove is plainly highly intelligent, but he has terrible judgment and lets his ability to spin an argument run riot over consistency and, sometimes, the truth 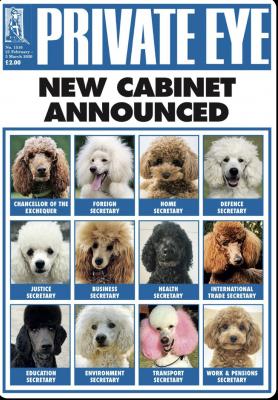 I've heard that about Gove as well - if you get him away from his advisers you get a much better minister.

You don’t even convince yourself.

Why h8 on the curvaceous lady?

Re quality a lot of what Guy said is spot on.  But also there are far more MPs now who lack in life experience and particularly on the labor side have never had a job that hasn’t involved sucking on the govt teat

absolutely humongous, all-deafening LOL at the idea that MPs with lack of worthwhile life experience is an issue “particularly on the labour side”.

Starmer was director of fuckin’ public fuckin’ prosecutions. What’s Johnson done other than write a couple of shit books?

Remember when people used to cite his time as Mayor of London as evidence of his being suitable for high office?

I’d let Patel carry me off to her shack for a shakedown.

It would have to be that way around (despite you having three gym memberships).

She's the size of a small elephant.

Also, Laz was fantasising about her carrying him off, which may be equally challenging for the poor girl

Airplane mob turns on lawyer who refused to mask up
'Off! Off! Off!'