Have you ever in your life seen anything more embarrassing 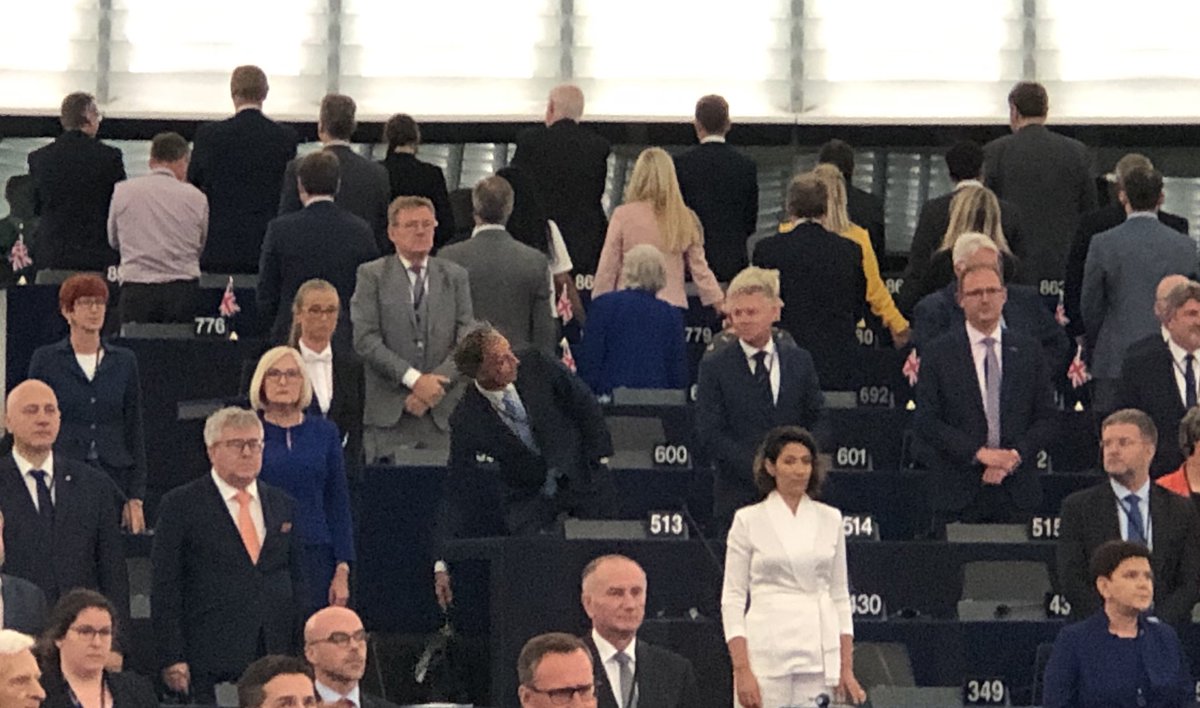 Brexit MEPs turning their back on Beethoven's Ode to Joy.

I see lots of declarations of the piece being bollocks and tripe, but not a single specific point being coherently disputed.

I know it hurts your little Englander minds, but maybe you should take what the professor has said on board.

"Well, for starters the UK and before that England was probably a nation state before it created an empire"

What you mean back in the Middle Ages?

"You can have an empire and be a sovereign state"

How do you think the Indians/Rhodesians/Kenyans/Malays felt about British sovereignty?

Supes is coming very close to vic reeves' "what about chickens"

You’re forgetting that Supes can’t be wrong because he’s better than everyone else. Can’t you tell? Every post of his is dripping with his sense of self importance. I mean, just look at him claiming to be the voice of Malays. This upper middle class Californian. He knows not the first thing about Malays and would sneer if he was ever asked to meet one.

See, in his mind brown, black, Asian people are inferior humans and incapable of having opinions except for those he decides they have.

Hell, he probably doesn’t even know what a Malay person is. Why should he? It’s beneath him to know

Sorry Panda, I didn't realise that you were old enough to have lived during British rule over Malaysia

Absolutely. I am more than happy to be educated on the motivation behind the Anti-British National Liberation War from someone who was there, as Panda seems to be implying that he was.

he certainly asked it simply

Nope. He framed his view in the form of a question but it was exactly that framing that betrays his view of the people he listed.

Note he referred to “the” Indians etc, lumping all individuals within each group together and suggesting they all share the mindset he decides they have.

Who the fuck has time for all of that.

if you say so

I must admit that is a remarkably disingenuous piece that Supes has posted.

yet another blanket dismissal without a single specific argument made against it.

I did think about taking a red pen to it line by line.

Unfortunately I only have a box of 12 red pens, and I fear I would need more than that to do it justice.

You British really don't like it up ya, do you.

"Well, for starters the UK and before that England was probably a nation state before it created an empire"

What you mean back in the Middle Ages?

Well, the Middle Ages ended towards the end of the 15th Century and there wasn't even any Great Britain, let alone British Empire until the beginning of the 18th Century but what's your point - you're the one that said it had never really existed - I am just pointing out that is not true. So what if it was a long time ago? Doesn't make the point incorrect.

"You can have an empire and be a sovereign state"

How do you think the Indians/Rhodesians/Kenyans/Malays felt about British sovereignty?

What on Earth has that got to do with anything? The UK was either sovereign in those circumstances or it wasn't. The feelings of Indians don't change that in the slightest.

The fact is that England/UK has essentially been a sovereign state since the break with Rome in the 16th Century. It's hardly surprising that people are loathe to relinquish that just because there was no homogenous nation-state between empire and EU. You're flailing with irrelevant questions to avoid the obviousness of the point.

The UK will have sovereignty for a nano-second post Brexit, as it gets repeatedly shafted by actual world powers. You've seen the deal on offer from the EU. How sovereign does it make you feel? You think the UK was George Bush's bitch during the iraq war? Wait until you see how badly we will need to abase ourselves for a deal with Trump.

The sovereignty argument is what is utter bollocks. The UK will be everyone's bitch. I simply do not understand why people like you don't seem to be able to get this.

Your "sovereignty" is a fucking pipe dream.

The reality of sovereignty post Brexit is yet to play out but if you think our position will be analogous to an undeveloped colony in the 19th century I think you are a bit of a plum.

I think Supes is becoming overheated in his caravan

Israel is a nation state. Has Supes asked the Palestinians what they think of this?

Snyder's point is that absent a colony the imperial core would have to either go the way of Rome or enter into arrangements with other imperial cores and the odd nation state to maintain its standard of living. The imperial cores of Europe chose the latter and became immensely prosperous, notwithstanding the near total destruction of the continent in the aftermath of the war.

So my point in bringing up the colonies of the Great British Empire is not entirely to suggest that we will become like one (though we will come closer than anyone would dare to admit). Rather it is to suggest that without them we will not be able to thrive on our own. It will require a surrendering of sovereignty, on worse terms than we currently enjoy, to either the EU, the US or to someone much more unsavoury.

We could try and go it alone, without any deals and keep 100% of our sovereignty, but then yes we would likely end up in a similar state to an undeveloped colony in the 19th century.

"Israel is a nation state."

Wot everyone (apart from Supes and Strutter) said.

Follow the money, I believe you’ll find it quite often leads to London.

Like it or not, the UK is and will be after Brexit a world power.  I’m an avid remainer by the way, I hate the concept of Brexit.  But don’t overplay it, as Margaret Thatcher once said “They will rue the day they crossed us”.  And she was right they (the Argentinians) very much did.

Why does Supes find it so hard to understand what the word sovereignty means?

tbf to supes in a world where globalisation has blurred sovereign lines and corporations are becoming more powerful than nations, it is hard to define what sovereignty means (in the sense of what is achievable)

sovereignty, in this world, necessarily needs to be pooled

each nation has two choices: they can pool sovereignty contractually (i.e. by treaty) or they can accept that their sovereignty is practically pooled anyway

this is not true of course in all ways (e.g. real property rights and incorporation) but even for some things which you might think are unavoidably nation-specific, such as taxation and even crime, are increasing globalised and sovereignty is lost, whether a nation likes it and legislates for it or not

so what is realistic sovereignty now? difficult to say

Yes well that's a very interesting wankfest for academic lawyers, but it's complete bollocks in practice isn't it.

this is the practical reality of sovereignty

the theoretical wankfest is over defining sovereignty at all

what a fuck wit

I just watched that speech.  What a deranged, ranty, old windbag.