In an undisclosed development, Allen & Overy and US firm O'Melveny & Myers have met under a cloud of secrecy in an unknown Frankfurt hotel to continue their merger talks. Nobody, apart from the entire legal community and its dogs, knows about it.

Negotiations between the firms were rumoured to have taken place earlier this year. Things went quiet, but merger talks have clearly moved up a gear following the furtive rendezvous last week between the top brass of the two firms. The stealthy meeting may sound like something from a John Le Carré novel, although not one of his best and with fewer killings and more sandwiches followed by PowerPoint slides on billings and synergy.

The US firm, which is headquartered in Los Angeles, batted away the story: "we don't comment on rumours or speculation" it said in a statement. But Allen & Overy was less guarded, as a spokesman for the Magic Circle firm said  "we have been clear that developing our presence in the U.S. is a priority and that we have spoken to a number of law firms there". He added "however, we do not have any developments to announce and reiterate that we won’t comment on any particular firm until the right time”. 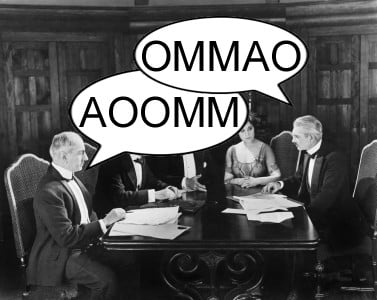 From a few angles A&O and OMM are a neat fit. The firms' equity partners are in sync in terms of drawings, with the Magic Circle firm's PEP at £1.5m and O'Melveny's at £1.4m. A&O has long-held ambitions for a US merger, and OMM brings powerhouse US coverage with its NY and DC presence and three offices in California. It is also of sufficient pedigree to take A&O up the aisle, having been cited as a firm of note in both Suits ("I'm choosing between Bratton Gould, Skadden Arps and O'Melveny & Myers") and The Sopranos ("He ruined his six-figure future at O'Melveny & Myers when he blew the Junior Soprano trial").

A merger would create a transatlantic beast of 3,000 lawyers. In revenue terms its £2bn would place it behind only Kirkland & Ellis ($3.2bn) and Latham & Watkins ($3.1bn). As for staff, London's A&O solicitors (like a lot of Magic Circle lawyers) have complained bitterly to RollOnFriday about not being paid at US firm rates. So the possibility of closing the pay gap a little with the likes of Kirkland by becoming what they envy - staff at a US firm - means some should welcome a merger. On the other hand, OMM's London lawyers may need to strap in. In the RollOnFriday Firm of the Year 2018 survey, one OMM lawyer chuckled, "We get close to top of US market rates for 2/3 of the workload - can't complain!" A work/life balance in step with an MC firm, instead of that of an under-worked London satellite, might be an unwanted change of pace.

UK/US merger negotiations can be tricky and many fall over when it comes to the partners voting on a new remuneration structure. A sticking point could be that a new merged firm would have to alter A&O's current lockstep in order to remunerate US partners in line with OMM's current model. These issues have bedevilled previous transatlantic negotiations, most notably causing the collapse of the BLP/Greenberg discussions in 2016.

“We get close to top of US market rates for 2/3 of the workload - can't complain!" A work/life balance in step with an MC firm, instead of that of an under-worked London satellite”

“Work/life balance in step with an MC firm”. Ha! Balance meaning complete lack of.  Or balance meaning you hopefullly don’t have to work the weekend.

Some MC lawyers leave to top US firms and actually find they work fewer hours.

Good to see the reading comprehension level of commentators is unaffected by the new layout.

O'Melveny is the only U.S. law firm that has a blog about how awful it is, written by a former associate no-less. http://brian-boyle-omelveny-torture-attorney.blogspot.com/

So 'Top Secret' I overheard one of their advisers loudly talking on a mobile phone about it as they walked down Cheapside at lunchtime 2 weeks ago....