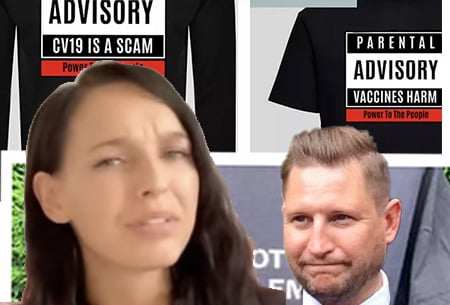 Fry (r) distanced himself from Power to the People UK's views.

Covid conspiracy cranks claim they have teamed up with a solicitor to fight employers who require staff to wear masks or take a vaccine.

'Power to the People UK', which alleges that vaccines kill and that Covid has been patented by Bill Gates, said that Chris Fry, who runs discrimination specialists Fry Law, will take its followers’ cases on a no win, no fee basis.

"If you have been discriminated against for being exempt from wearing a mask, or your employer is trying to force the covid vaccine on you, please get in touch with him", the group informed its adherents this week in an Instagram post.

PTTP is operated by Ellie Grey, who set out to debunk the view that she was a conspiracy theorist in a YouTube video in September. According to Grey's video, at the beginning of 2020 "we all saw videos from Wuhan of people dropping dead in the streets, people would be driving their cars and they would crash them because they'd just die at the steering wheel". 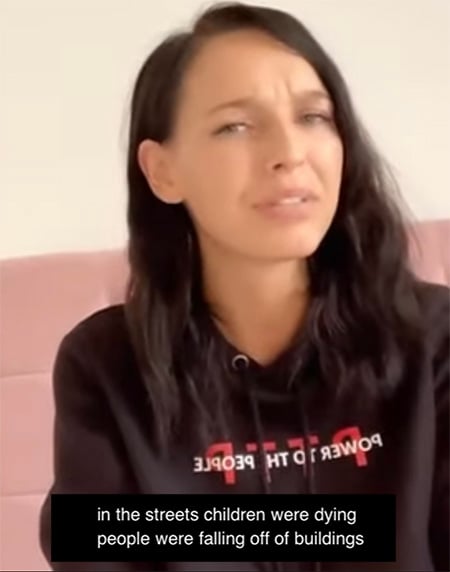 In a case of 'citation needed', Grey claimed it had been confirmed that Covid was lab-made, "released mostly on purpose", and "patented by the Gates Foundation".

Power to the People UK's website provides template documents followers can use to try to get themselves exempted from wearing masks at work or in school. Antivaxxers with family members in a care home are encouraged to print out a 'Vaccine Injury Liability' contract and compel the nurse to sign it before administering the vaccine to elderly relatives. 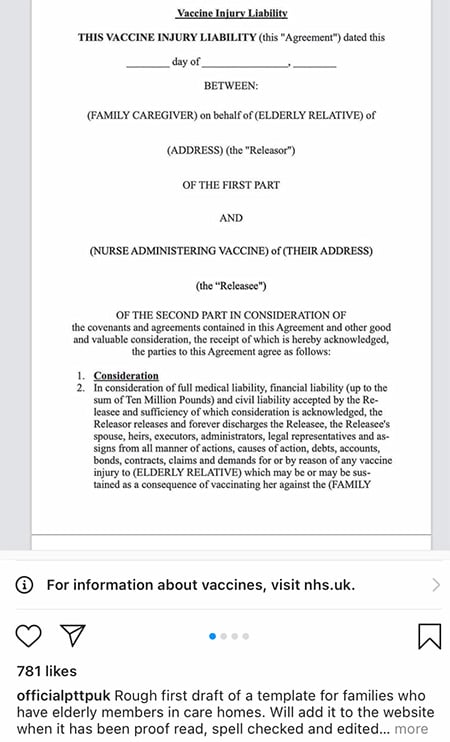 The group's posts have been repeatedly flagged as false by fact-checkers, including claims that "the sun protects you from cancer" and that an annual mammogram will "give you cancer". 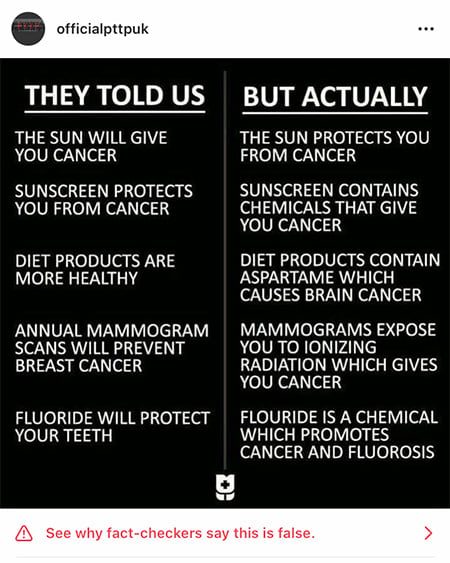 Take the red pill! Actually, don't, it gives you cancer.

A recent PTTP post proclaimed that Andrew Wakefield, the disgraced doctor who was struck from the medical register after falsely claiming that the MMR vaccine caused autism, "was right".

The group’s gift shop sells branded clothing bearing slogans including, "Vaccines harm", "CV19 is a scam", and, "I've got 99 problems and Covid aint 1". 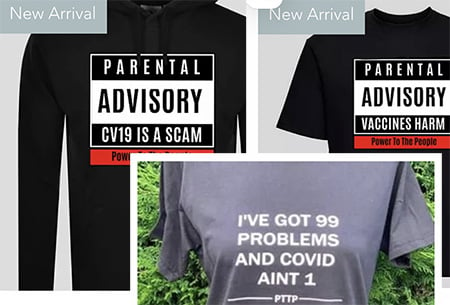 A perfect gift for the exhausted NHS worker in your life.

Concern that the spread of misinformation is affecting take-up of the vaccine has prompted the NHS to embark on a myth-busting campaign which explains that Covid is real and the vaccines are safe and effective.

When he was contacted by RollOnFriday, Fry distanced himself from PTTP's views while also justifying his involvement with the group. The solicitor said his "view" was that "Covid is real, vaccinations are a great idea (I’m having mine on Friday) and that Face Masks should be worn unless you have a proved disability which prevents it".

He said he was only acting for people who had proven their disability "but still been refused access, often in a humiliating and degrading way", and that "the extent to which we’ve teamed up with Power to the People is limited to helping people who meet this criteria in respect of disability discrimination cases only". PTTP should watch out, however, as obviously from Friday, Microsoft's founder will be able to control Fry and listen in to his conversations.

Disgraceful people all about the money for these people no moral compass what so ever .

Note the alternative spelling of "fluoride".

As someone who had covid, and found it to be the worst experience of my life, this level of denialism makes me realise that, perhaps, polite debate has its limits when dealing with people like this.

Why, for instance, should people like this be entitled to vote?

It's a thing. My son has it. Which means that we have had Covid in our house. Which means I probably had it. Which is odd, as I don't remember having it, and/ or didn't notice.

So, just to revisit a topic from a few months back, is this guy the kind of lawyer who it's entirely ok to criticise for providing legal representation to clients seeking an outcome that the criticising audience consider socially undesirable?

After all, he's just providing legal services and helping people to enforce their rights, isn't he? Are you the kind of fascist who hates people having rights? Hmmmm?

Are we sure that criticising him doesn't put lawyers at risk generally and serve to undermine the public's faith in the rule of law (or whatever high minded principle we feel like waving around today)? Do you know who else hates the Rule Of Law? Donald Trump, that's who. Are you Donald Trump? Or worse, an apologist for Donald Trump? Eh, eh?

I'm just remembering the barney from late last year when people squealed and moaned that criticising similar gutter-dredging behaviour* by unscrupulous immigration lawyers who were trying to help anyone and everyone evade deportation no matter how absurd their claim to asylum happened to be was totally unacceptable. Apparently, people seemed to think at the time, that was the kind of unmeritous case, designed and pursued with the express intention of undermining government policy, that we all had to just turn a blind eye to. They were just standing up for peoples' rights, and if we didn't like that we weren't to criticise them but instead to complain that the government hadn't taken those rights away already.

Anything else was an 'attack on lawyers' that put us all in jeopardy.

But today something is different, and it isn't clear why...

*to be clear, I do think this guy is a complete dick. But I'm just curious as to why it's ok to criticise this kind of lawyer, but not to say the same thing about other lawyers doing the equivalent thing in the immigration tribunals. Which always seem to be a sacred cow.

That Vaccine Injury Liability, that's legal, that is. Look at all them legal words on it. "Consideration" is one. "Party is another". Dead legal, I tell you.

Mind you, they could make it more legal. If you put a stamp on it and write 'Accepted for bearer' on it, and then your name, it means the Queen guarantees it. Straight up. Then they got to do it, or HM gets involved. You got to get the stamp the right way up, mind. Otherwise it's high treason and the Queen's got to hang you. No choice about it, she don't make the rules.

It’s heartwarming that someone who believes in the dangers of covid can see past Power to the People’s views, which if believed would lead to the spread of the disease, and still engage with their followers to make money. There’s hope for Brexit Britain yet!

There are two separate issues - nutters and separately the fact currently a teenager cannot be forced to be vaccinated or wear a mask in school and it may be illegal to sack a worker who refuses a vaccination. I don't think it particularly helps to conflate the two.

Hey Paper cuts, you could have saved several lines of text simply by saying "people who don't share my opinions shouldn't be allowed to express their opinions or vote".

I would happily concede to Ellie that the Earth is not round.

You cannot control what your whacko clients publish about you.

Whether you abandon them or throw them under a bus is of course up to you.  But you aren't responsible for what they publish.

There used to be this thing in British countries that something called "freedom of conscience" existed.

I've tried for the life of me to find out what this "freedom of conscience" meant but the only search results Google shows me relate to post war anti-colonial movements.

Mystified as to why I've got 6 downvotes here.

Covid toes is a real thing. What was there about my post to downvote?

Some of you really are bitter and twisted freaks.

Of course I exist! Stop talking about me as if I'm not here.

Are COVID toes the same as hobbit toes?  If so, I’ve still got it.

COVID is actually the secret name of the mind control space station orbiting the Earth.

It is manned by a dozen aliens and Charles Manson.

They considered hiring Boris and Trump, but balked at their lack of honesty.

At least when Mr Manson meets you he is honest about his murderous intentions. 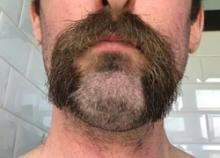 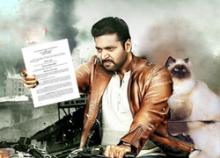