"Look me in the eye/Then, tell me that I'm satisfied"

Numerous county court judgments (CCJs) have been made against Slater and Gordon, RollOnFriday can reveal.

Since 2015, the firm has been subject to at least six CCJs.

The most recent judgment, for £1,100, was handed down on 22 September last year and is shown on the register as still unsatisfied five months later. A spokesperson for Slater and Gordon said the record "hasn't been updated" and was "incorrect", and insisted that "we don’t have any outstanding CCJs".

Staff at both the Registry Trust, which operates the public register of CCJs, and at the County Court Money Claims Centre which dealt with the claim, were unable to confirm Slater and Gordon's assertion. However, they agreed it was possible that the debt had been settled and was not yet showing up on court records.

Being the subject of any CCJs at all may strike readers as an unusual state of affairs for a major law firm. A county court judgment is made if a claimant takes court action over a debt and the defendant does not respond. CCJs can make it difficult to obtain credit and are a common precursor to a Winding up Petition, which can be brought if the sum owed exceeds £750. A Winding Up Petition gives a company seven days to clear its debt or face forcible liquidation. A source speculated that a "£1000 debt could in theory bring down the walls of Jericho". 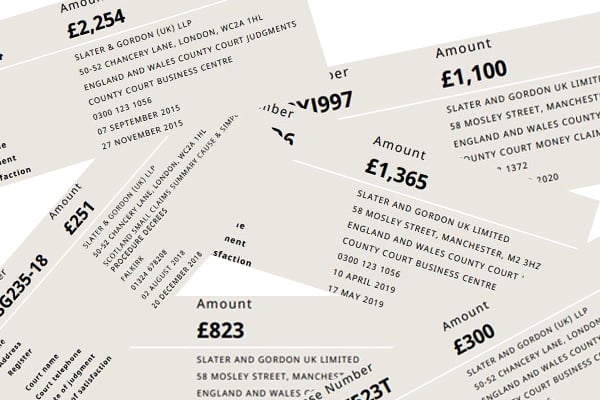 Because the register only displays those CCJs which remain unpaid for more than 28 days and the record expires after six years, the total number of CCJs made against Slater and Gordon could be far higher than six. Slater and Gordon repeatedly declined to confirm how many CCJs it had collected in total.

The leading private injury firm denied a source's claim that it was currently the subject of several outstanding County Court Judgments resulting from claims brought by expert witnesses which the firm had failed to pay. "I can confirm we have no unsatisfied CCJs", said a spokesperson.

One expert witness instructed debt recovery agents when her invoice of around £5,000 remained unpaid by Slater and Gordon for several months, said a source. It was settled this week by another firm which took over the case, said the source.

Responding to queries about CCJs and the £5,000 bill, a spokesperson for Slater and Gordon said, "Your facts are not correct". She also denied that debt recovery agents had attended the firm's headquarters in Manchester in connection with an unpaid debt, and then the General Counsel took over to make the same points.

In 2014, ROF reported how Camden Council staff handed over a bag containing £7,000 in cash when bailiffs started carrying out its computers. If Slater and Gordon finds itself in a similar situation, it may be tempted to melt down the Golden Turd awarded for coming bottom in the RollOnFriday Firm of the Year Survey 2021. Slater and Gordon’s fees payable team are advised not to do this, as the Golden Turd trophy is plastic and highly toxic.

This shows really poor financial hygiene and, even though they are small amounts, these sums make the difference to small and self-employed suppliers. Imagine the time, energy and knowledge required to enforce over a debt of less than £1k. Now imagine the many suppliers that don't have the time, energy or knowledge to enforce a debt of less than £1k. The CCJs (whether eventually paid or not) are the tip of the iceberg.

Do other big firms get CCJs against them as a matter of course? It feels odd for officers of the court to have judgments for non-payment. I get how there might be an admin fail and an accidental one off, but year after year?

S&G have never paid bills on time, this is likely to continue as the finance team gets restructured....

I think that's right new.  I don't think it's unheard of for law firms to have the odd CCJ against them - but literally the odd one - due to clerical errors or admin issues.  It can happen so the odd one every few years for a big firm, with any clerical issue then resolved quickly, is something that can happen/be accepted.

It's not just expert witnesses who are not being paid by S&G - it's barristers too.

Does anyone know if the Prime Minister has been informed of this incredible development?

Unless there are Martians landing on Whitehall at this very minute then I think this will need to go straight to the top of his inbox.

I mean, Slater & Gordon, a shithole? For another year running? Who could have possibly suspected?!

Slaters losing the best Lawyers and now by the looks of it losing clients as well as a few CCJs. At least 2021 has started well for them.

The description of winding up petitions is completely wrong.

They aren't a demand for money at all.

A company can't always avoid liquidation even if wants to pay the petitioning creditor.

Absent extraordinary circumstances (e.g. Carillion) the theoretical minimum time between presentation and the first hearing is 3 weeks and in practice it is 6-8 weeks (normally, 10-12 in while the coronavirus restrictions are in place). Few companies are wound up at the first hearing if they attend and can articulate some kind of strategy to deal with the indebtedness.

How would the CCJs be enforced? S&G don’t have offices any more do they?

Sounds like a combination of poor admin and CCJs being too easy to obtain.

Some years ago now, a costs draftsman's firm was driven into insolvency because of unpaid S&G debts.   They did a lot of excellent work for Fentons, and then when Fentons were swallowed up, the work kept flooding in but payment came there little.