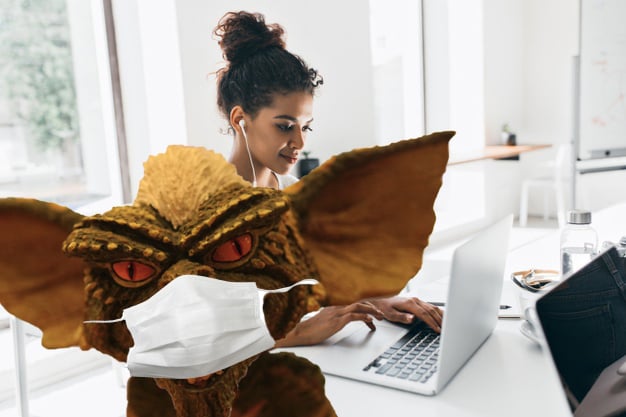 The two largest legal education providers in the country, The University of Law and BPP University, have been criticised for how they have run their exams during the pandemic.

ULaw has been battling with IT gremlins after it moved to remote assessments to enable it to safely assess students, who complained that the first tranche of online exams has been “an absolute shambles”.

The Wills and Probate exam in December was postponed "at the last minute", said a student, due to unforeseen maintenance work. 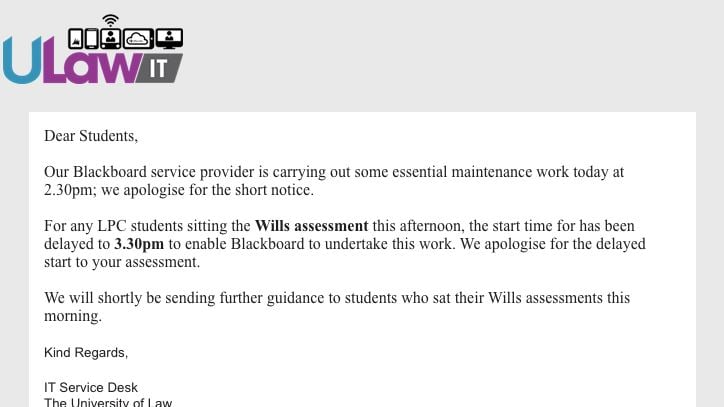 Despite staggered start times to relieve pressure on the system, the site then crashed repeatedly.

According to one candidate, many students experienced the screen of death mid-exam, while "some never made it on" and will need to attempt it again in late January.

On Monday, human error appears to have made an appearance when the wrong paper was uploaded for students' Legal Writing Assessment. Candidates said the error wasn’t acknowledged for almost four hours. The assessment requires students to submit their responses within 24 hours. In response to the issue, ULaw extended the deadline to seven days.

ULaw is not alone in struggling to seamlessly deliver its services in a Covid world. The Presidents of the four Inns of Court, Inner Temple, Gray’s Inn, Lincoln’s Inn and Middle Temple, wrote to BPP University in December to complain about "systemic deficiencies" in its teaching of the Bar course and GDL last term.

While ULaw has been criticised for its online performance, BPP came under fire for insisting on face-to-face exams. The Lincoln’s Inn Student Association described BPP's decision to push ahead with in-person assessments as "irresponsible and wrong", stating that it discriminated against students who were vulnerable or had vulnerable families, or who lived abroad. BPP bowed to the pressure on Monday and announced that all its exams would move online.

A spokesperson from The University of Law said, “For technical reasons we regrettably had to replace a Legal Writing paper.  We immediately contacted  the affected students and we put in place alternative arrangements for them.  With reference to the Wills Assessment undertaken before Christmas, we take full responsibility for the issues experienced by our third party supplier and we worked closely with them to resolve this as quickly as possible.  As you can appreciate we are dealing with unprecedented circumstances in delivering our assessments online but our priority is always to work through these as promptly as possible to minimise any disruption to students.”

My sons are with BPP. This has been online all year and once it got going in early September has been fine actually for most things including the final exams (GDL)  in December (for the last term's work) which were 100% online...although perhaps I should reserve judgment until the marks are out! (Not sure about the LPC)

Online exams are a totally new experience for most. For a start you are typing not handwriting. Sometimes there seem to be maximum word counts which is not the case with paper so that is a very different thing and skill. Then there are questions over what you can do - usually you can type an answer on your computer in word, check it etc and then paste it in. If the exams are open book as many are they need to be very clear about what can be cut and pasted or retyped and obviously all copying and breach of copyright is banned which is clear.

The other issue for lots of people is dodgy wifi connections. We have not had problems and I have 2 lines here but even in this bit of outer London it is not that great. Another new skill is having to test your broadband is working before you start a paper and get things ready in advance, try to ensure silence in the building and at least in the room for the duration of the exam. Also decide if you want your materials printed out or if you can have 3 documents open on 2 screens  if you will be referring to 6 things at once - that is something that will vary from person to person but needs to be thought about well in advance particularly when there are advance materials sent before the exam to study.

I am not sure about checking your work and how that works compared with handwritten exams but is something else those doing these exams need to consider in deciding how much time they will spend on each element -  the extent to which the tech lets you  or doesn't let you go back and correct things and if it takes longer to do that than just flipping your pieces of paper over.

P/ss off Lydia, no one cares.