A parliamentary select committee has accused Allen & Overy of not taking diversity seriously after the firm refused to disclose gender pay gap data.

As RollOnFriday revealed last week, the chair of the Business, Energy and Industrial Strategy Committee, Labour MP Rachel Reeves, wrote in May to the five Magic Circle firms demanding they disclose details of their partnership pay gap. A&O declined.

Today the committee published the five firms' responses and Reeves blasted A&O. “Allen & Overy can’t even come clean on its partner data now", she said. "It’s easy to talk the talk on diversity and inclusion, but if a business is dragging its feet on providing even basic information about its gender pay gap then it begs the question of how seriously it takes its responsibilities to valuing all its staff and how dedicated it is to committing to promote female associates to partner level".

Reeves clambered onto her high horse even though firms were under no duty to include partner data. Alluding to the failure of parliament to draft appropriate legislation, but shifting the blame onto A&O nonetheless, Reeves said, "It is clear there are weaknesses in the reporting requirements, which firms such as Allen & Overy have been able to exploit". She said the committee "shall be looking at what recommendations we can make to ensure that businesses are taking their responsibilities on fair pay seriously”.

An insider told ROF that the letters were drafted with one eye on their expected publication. They show all the firms (apart from A&O) bending over backwards to provide the overall salary and bonus gender pay gap figures. Here's how A&O stonewalled those nosy MPs: 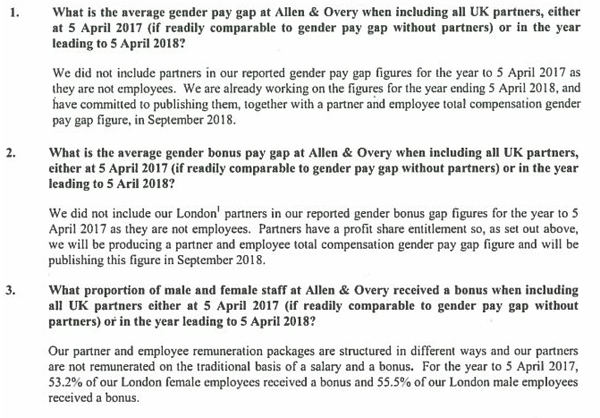 And here are the letters, which give up all sorts of other man/woman/pay stat stuff:

This is mindless virtue-signalling by grand-standing politicians. Multivariate analysis of the gender pay gap shows that it is largely the result of different career choices, freely made. See https://www.personneltoday.com/hr/jordan-peterson-gender-pay-gap-exist and http://www.google.co.uk/search?q=kate+andrews+pay+gap.

I have no links to Allen & Overy, I just regard the gender pay nonsense - and politicians’ attempts to use it to promote their own careers - with contempt.
362
Vote up!
381
Vote down!
@Incognitoat 15:05 - maybe start and finish with your "I just regard the gender pay nonsense... with contempt" comment. The rest is just waffle designed to self justify a position which global evidence strongly suggests is just built on bigotry and prejudice deliberately ignorant of pretty much all of history.
401
Vote up!
365
Vote down!
@anonymus user: It‘s fairly ironic that you do precisely that of which you accuse Icognito: Disregarding empirical data (that Icognito has cited, while you have resorted to terms like „bigotry“ instead). But thank you for making your post - it clearly demonstrates the current mindset which disregards science and tries to replace it with political agenda.
360
Vote up!
361
Vote down!
LOUD NOISES!!!!!!!!!
355
Vote up!
357
Vote down!

A&O employs identikit private school educated Oxbridge/Russell Group types and promotes the slightly-sociopathic-male or female-but-childless-or-has-au-pair-nanny-and-eventually-boarding-school version of them to partners.  No parent actively involved in their children's upbringing could withstand it, unfortunately, me included.  It's a sweat-shop. Make some cash and get out while you still have a life.

Partners in a partnership with minimum drawings and profit share are directly comparable to company directors with salary and share options. It is utterly disingenuous - and mendacious - of law firms to exclude equity partners from equality legislation.

Partners in a partnership with minimum drawings and profit share are directly comparable to company directors with salary and share options. It is utterly disingenuous - and mendacious - of law firms to exclude equity partners from equality legislation.

EXCLUSIVE Gym rat trainee photographed yelling virus is fake
Someone get him into SAGE, stat

Masks, temperature tests and one way corridors as firms plot return to offices
It is going to be weird

Pandemic lawyer of the week: QC acts out Godfather
Makes offer you can't refuse, of course