The RollOnFriday team is sad to have to report that a man in Belgium has caught one of us self-pleasuring.

'Krebs Ferree' emailed to let us know that he recorded a pervert through a camera in one of our computers at ROF Towers. He says that unless we cough up he's going to send it everywhere. 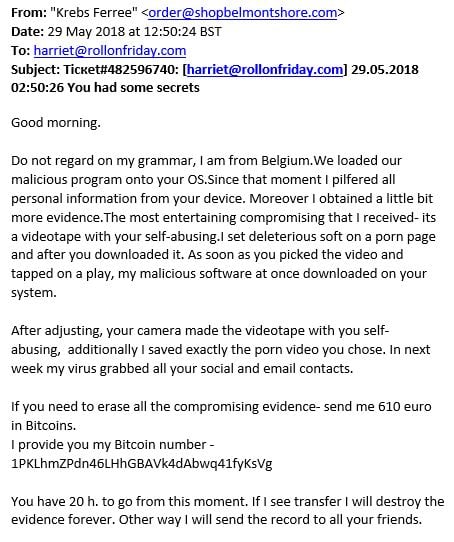 Against the veracity of all this, he did address his email to a woman who left the business ten years ago. But in its favour, it's true and it was me. 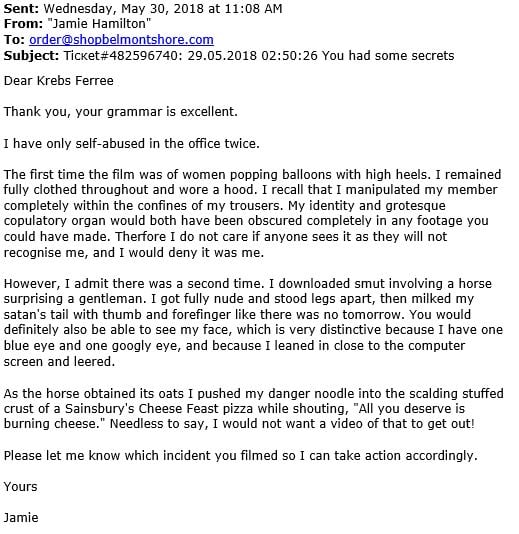 I missed the deadline by a couple of hours, but Krebs has not replied and mother hasn't called, so fingers crossed he's got nothing.
Category
Feature

Also, the word 'pilfered' is sadly underused.
213
Vote up!
234
Vote down!
Such wonderfully rich and vivid imagery. Well written sir, may your member stand tall and proud.
222
Vote up!
243
Vote down!
thank you for making me laugh so much
243
Vote up!
239
Vote down!
Now I look weird for laughing out loud in the office reading Jamie's reply
231
Vote up!
232
Vote down!
A compelling case for Brexit. David Davis take note.
226
Vote up!
222
Vote down!
Wonderful!
221
Vote up!
253
Vote down!
lol
253
Vote up!
241
Vote down!
i cried a little when I read the response... RoF's badgering of internet fraudsters is consistently perfect.

Anyone gullible enough to fall for this is not going to know how to acquire bitcoins and pay them over to the guy/girl!