The aroused judge suppressed his libido just enough to hear the remaining evidence, and later convicted Smith-Williams of murder, sentencing him to 35 years in prison. Smith-Williams' lawyer, Jerome Lynch, appealed the conviction on the basis that the judge behaved inappropriately by letting his inside voice out. 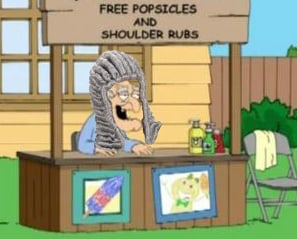 Greaves contemplates what to do in his retirement.

Lynch also argued that Greaves responded inappropriately to crude language used by one of the witnesses, who had referred to "f***ots".

At the Court of Appeal hearing, Judge Maurice Kay said Greaves was not at fault for the witnesses' slurs, as the Bermudian judge "has a very personal style, whereby he engages with witnesses, defendants, juries and advocates in an informal way, often using casual language", and, he added, "rich metaphors”.

Kay rejected the appeal on the basis that the safety of the conviction had not been undermined. He also avoided the trap of announcing that any of it made him randy.

Greaves is not the first judge to be caught with his mind wandering to a seedy place during work time.

Always hard to progress complaints against judges. In England there was a recent case where the JCIO stonewalled allegations against a judge on the basis that the alleged misconduct was outside its remit because it related to the judge's decision making.