Firms scoring between a middling 60% and a very good 80% for culture in the RollOnFriday Firm of the Year 2019 survey received mixed reports from staff, some of whom maintained grave doubts about the wisdom of recent mergers.

At BCLP (79%), a far flung solicitor reported that "sadly the legacy BLP London culture has not made it out to the Asian offices". She blamed a "large number of lateral hires being made in order for the firm to expand in Asia". As for its merger, many were positive about binding with a US firm. The firm would maintain its "genuinely friendly and inclusive" culture, said a junior solicitor, the result of "lots of quirky people, but in a good way". On the dark side of quirky, another lawyer suggested that "things such as the Presidents' Club scandal undermine the hot air about positive culture".

Charles Russell Speechlys (75%) appeared to be cementing a collaborative culture almost five years since its merger. A junior solicitor felt the combination was "improving following a bumpy ride". (Counterpoint: a colleague said "the Charles Russell lawyers and the Speechly Bircham lawyers do tend to still work within their own teams"). "Guildford office culture is good", said a lawyer who possibly works there, but "London is always like a morgue".

Post-merger issues were clear and present at Golden Turd 2018 winner Irwin Mitchell (75%). "Those of us from the Thomas Eggar merger are gradually humanising the personal injury elves from traditional IM", said a partner. A junior lawyer noted that the firm had tried to bridge the gap with a "One IM" mantra. Except "the firm is made up of two very distinct and not always harmonious divisions", with the result that "it's difficult to establish a name within business legal services with the tag of 'ambulance chaser' always hanging around somewhere in the conversation."

A senior IM solicitor was adamant the strategy was working, citing a "crazy level of engagement with groups such as IMempowered, IMrespect, IMable, IMequal, IMmodernlife". 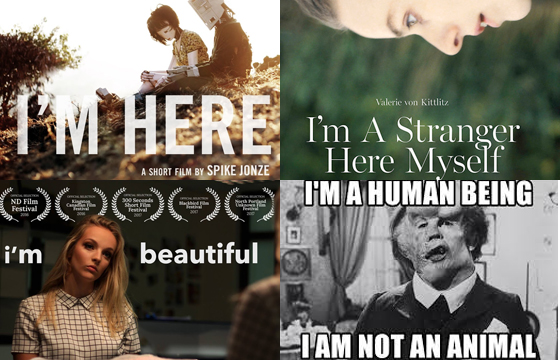 At CMS (67%) some staff remained unconvinced about the firm's combination. A senior solicitor complained of an "unpleasant post merger" atmosphere. Others were more open-minded. A junior lawyer said that the firm was "a weird mish-mash following the merger". "It's a disparate bunch", said a senior solicitor, "with Cameroons, McKennites, Nabarroles and Olswangers, but somehow it fits together". A senior solicitor said it was clear CMS was "working really hard to build a positive culture post-merger". 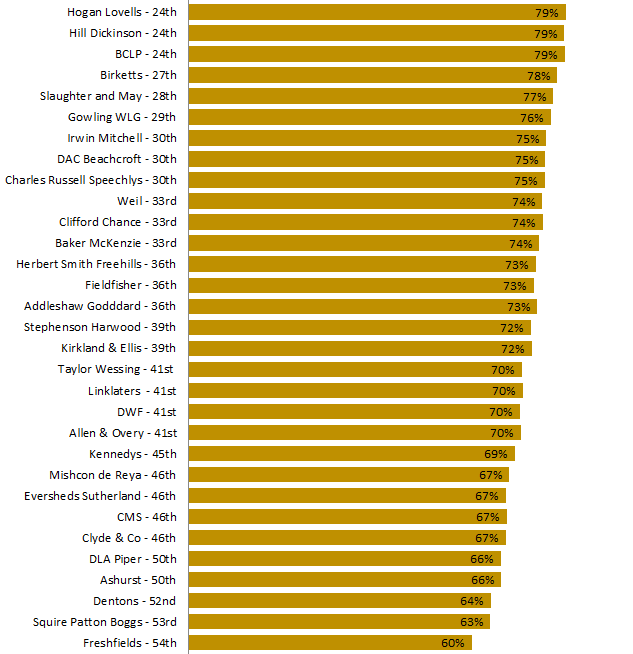 For other firms, scandal had an impact on staff's perception of the culture. At Baker McKenzie (74%), many respondents said that generally the firm had "friendly" staff who were "super down to earth". However, there was still awareness that a "series of events", particularly the "sexual harassment case" had rocked the firm.  A senior solicitor noted that the firm had reacted well "to ensure that people's concerns are listened to and acted upon". She added that, "in my own team, the partners were clearly dismayed about what went on" and felt that what happened was "not representative" of the firm's culture.

Baker McKenzie was not the only firm that was forced to address #MeToo issues. At Clyde & Co (67%), one lawyer said of the firm's culture: "well, there was that partner who took people to strip clubs." But as long as they avoided misogynistic lone wolf partners, associates expressed a great deal of happiness with their peers. "We are generally a sound bunch" , said a junior solicitor, although "I would hate to be a teetotaler here". 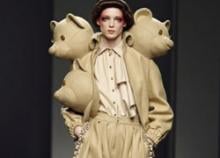 The culture at SPB is positively toxic

The comments you've received on one firm's #metoo issues are conspicuous by their absence there... *cough* Slappo *cough*

give up guys, it’s embarassing.

The culture at Clydes is fine

When are you going to talk about the #metoo stuff, ROF?

Write in and tell us about it and we can.

I have, Jamie.  Repeatedly. You haven't even come close to alluding about what you've been told on numerous occasions in these surveys.

Who would seriously be bothered to downrate comments that sexual harassment is not being reported?  Unless it's a bunch of Jamiebots defending his journalistic integrity or Mr Evidence back again (who notably doesn't appear to care about demanding evidence for anything else), how sad is it that there are folk out there who seriously want to suppress discussionof their colleagues being treated this poorly?