In a shocking revelation, Deliveroo has announced that lawyers are the healthiest professionals in the UK. Well, according to takeaway stats only.

According to a report by the takeaway service, lawyers make the most healthy choices when ordering their food. Supposedly, they "love salads", specifically "customised salads". The report also revealed that lawyers like to pore over the detail as they are "the most selective eaters" and make "the most amendments (eg. add chicken, remove bread) to their orders". Which goes to show that lawyers can't resist marking up a document. 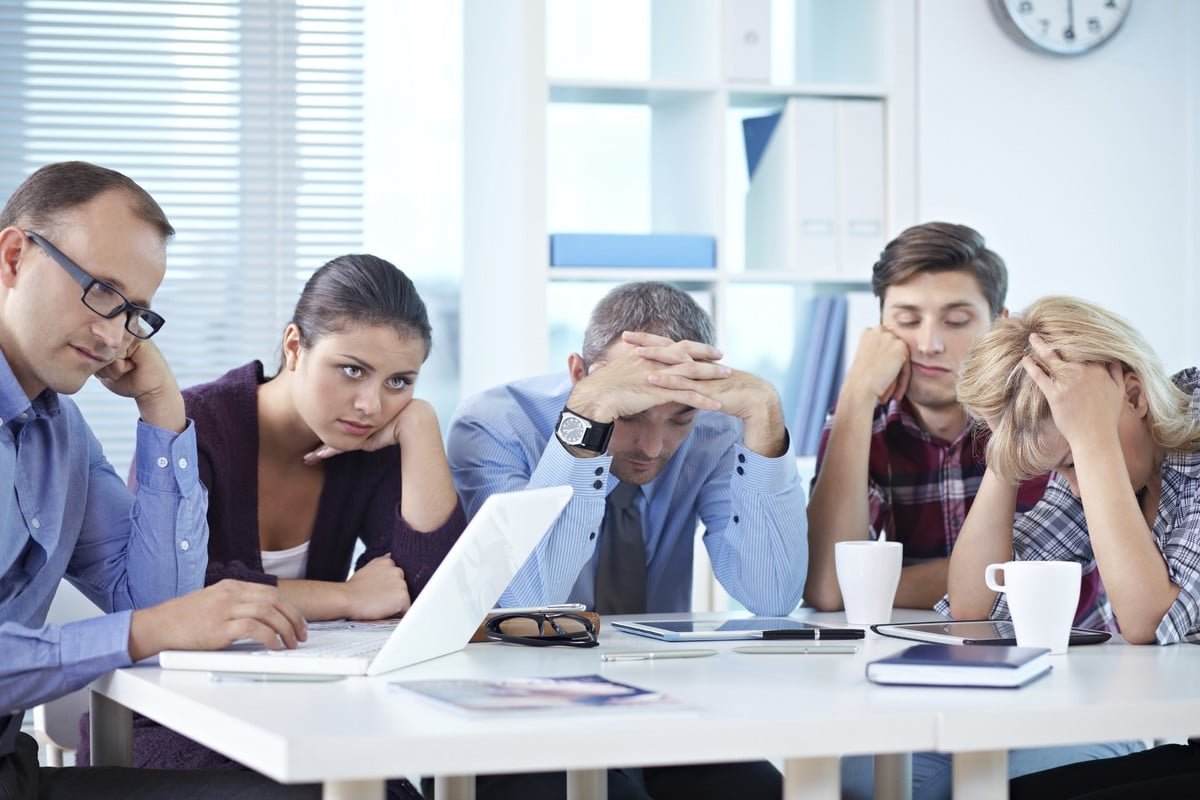 Some shafted partners at law firms are known to live off a diet of egg sandwiches and black coffee. And would be more likely to be described as moon-tanned and obese rather than healthy. Which makes for a depressing thought as to the state of accountants if lawyers are deemed to have the most salubrious diets.

Inspired by Deliveroo's marketing ploy survey, a RollOnFriday journalist placed an order on the takeaway site when writing the story. Despite receiving a notification that the meal had been delivered, sadly, it never arrived. It resulted in some lonely chat with the patient Deliveroo customer service team:

Whether or not the rider was frozen to a lamp post, the RollOnFriday journalist had a story to write. A customer service member offered her sympathy*: 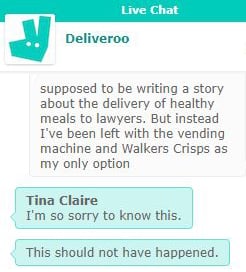 By the end, research for the article was getting pretty desperate: 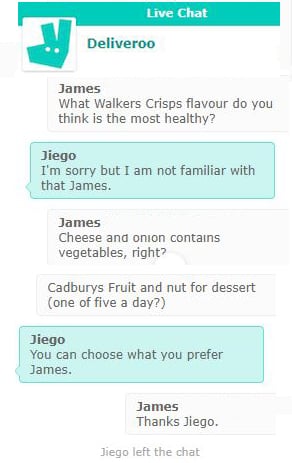 The Deliveroo spokeswoman who sent RollOnFriday the initial marketing blurb, said she was "so sorry to hear about the order" and said that "she would look into this now". However, RollOnFriday is still waiting for an update as to the whereabouts of the rider and the meal.

* Deliveroo provided a refund for the lost meal (ok), but no additional compensation (booo).

My upstairs neighbour ordered two Deliveroo meals a day and would submit a spurious complaint about each one.  It was cold.  It was late.  It never arrived.  The rider was rude.  Each time, he would be refunded the cost of his meal.  This went on for about a month before he was blacklisted.  A month of eating two hot meals a day, gratis. It's not that I'm jealous of him or anything...

Anon 1 Feb - 2x free hot meals a day , sure --- but he still has to live with himself #modernmorality

Did somebody say “mint imperials”?!

Had a similar experience this weekend. Notification said delivered but nothing arrived. Deliveroo riders seem to be literally eating into the company's profits